UPDATED. Wave me off: creating landing strips for albatrosses in the Galapagos

The response of breeding ACAP-listed Waved Albatrosses Phoebastria irrorata to large brush clearings (pistas or airstrips) created in the interior of the south side of the island of Española in the Galapagos is being assessed by James Gibbs of the State University of New York’s College of Environmental Science and Forestry (click here).

Large numbers of albatrosses breed in the interior of the island among thick vegetation.  As a consequence the birds must scramble in and out of small open areas for take-off and landing and then walk great distances through the brush to their nest sites.  It is thought that the growth of woody vegetation  may be related to the earlier eradication of feral Domestic Goats Capra aegagrus hircus on the island.

Two years ago counts were made of breeding birds in ten 50-m radius plots scattered through the island’s interior.  Every woody plant was cut by hand and removed in five of these plots.

A Waved Albatross takes off and clearing brush on Española 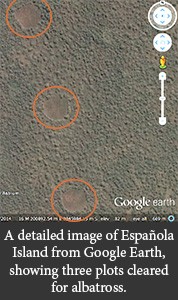 Last year the breeding birds were counted: the cleared areas gained five breeding albatrosses on average, the controls (uncleared plots) none.  These counts are now being repeated.

The study forms part of a larger effort by the Galapagos Conservancy to decide whether to let the island continue to recover without intervention from the ravages of 100 years plus of goat infestation, or if large-scale habitat management, which could include brush clearing, is needed to get island restoration back on track.