UPDATED. A Northern Giant Petrel gets bitten by a Great White Shark - by mistake?

A Northern Giant Petrel Macronectes halli was observed feeding from tethered bait deployed to attract Great White Sharks Carcharodon carcharias to a tourist vessel near Dyer Island off South Africa’s southern coast on 8 April.  It sustained two wounds to its left side when a Great White approached the bait.  The bird, a juvenile by its all-dark plumage, was then captured in a scoop net and taken to the African Penguin and Seabird Sanctuary’s newly opened rehabilitation centre in Gansbaai (click here).  The sanctuary is a project of the Dyer Island Conservation Trust.

Following three stitches by a vet the bird is now doing (and eating) well in temporary captivity. 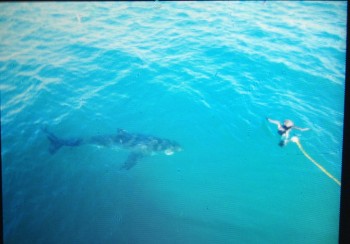 The shark approaches the bait - and the giant petrel, photograph by Jeremy Miller 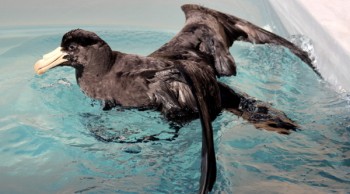 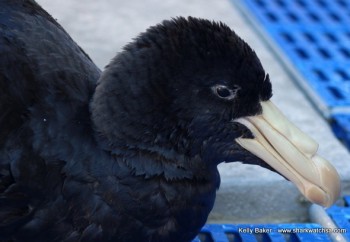 The wounded giant petrel in captivity, photographs courtesy of the African Penguin and Seabird Sanctuary

Great White Sharks are infrequent predators of seabirds around Dyer Island, with only a couple of attacks reported on African Penguins Spheniscus demersus and Kelp Gulls Larus dominicanus in one study, so it seems likely the shark in this instance was going for the bait, rather than for the bird.  Two other studies have reported penguins and gulls as prey of Great White Sharks in South African waters.

With thanks to Wilfred Chivell for information.