South Africa’s Antarctic research and supply ship, the S.A. Agulhas II leaves Cape Town today to undertake the annual relief of the overwintering team on sub-Antarctic Marion Island.  Aboard will be a four-person team from the University of Cape Town’s FitzPatrick Institute, led by its Director, Peter Ryan.

During the approximately 20 days ashore Peter with MSc student Ben Dilley will continue to undertake transects to estimate densities and numbers of burrowing seabirds (including ACAP-listed White-chinned Procellaria aequinoctialis and Grey P. cinerea Petrels) around the island towards Ben’s thesis “Assessing the recovery of burrow-nesting petrels two decades after the removal of cats at Marion Island.”  Ben spent 13 months over 2012/13 on the island when the bulk of the petrel surveys was undertaken.  They will also be recording wing moult in Wandering Albatrosses Diomedea exulans of known age and breeding status in the Gony Plain long-term study colony and deploying fine-scale three-dimensional loggers on breeding Wanderers to record at-sea behaviours. 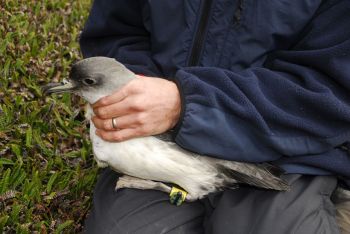 Overwintering team members Stefan Schoombie and Janine Versteegh will replace Alexis Osborne and Vonica Perold, who will return to South Africa next month after 13 months on the island.  Stefan will continue studying aspects of the breeding biology and foraging ecology of the two species of sooty albatrosses Phoebetria spp., which formed the subject of his MSc research, conducted during a previous year’s stay on the island over 2013/14.  He and Janine will also continue observations on long-term study colonies of Wandering and Grey-headed Thalassarche chrysostoma Albatrosses and Northern Giant Petrels Macronectes halli.

As in previous years underway observations of seabirds and marine debris will be made on both the outward and return voyages.

With thanks to Ben Dilley, Peter Ryan and Stefan Schoombie for information.