The breeding site of the recently described Bryan’s Shearwater Puffinus bryani has been suspected to be on Japan’s Ogasawara Islands where corpses of birds have been previously found (click here).

News is now in of the confirmation of breeding by the Critically Endangered shearwater with an incubating bird being discovered on Higashijima Island in the Ogasawaras, as described below by the Mainichi Japan of 25 March.

“A team of scientists has confirmed a nesting site of an endangered seabird species once thought to have gone extinct on the Ogasawara island chain, it has been learned -- the first time a nesting site of the species has ever been discovered.

The species, "Bryan's Shearwater," whose body length ranges between 27 and 30 centimeters, was believed to have gone extinct after it was last seen on Midway Atoll in 1991. Scientists conducted DNA testing on seabirds found on the Ogasawara Islands -- which have been recognized as a UNESCO world natural heritage site -- between 1997 and 2011, as their features matched those of the Bryan's Shearwater.

In 2012, it was confirmed that the birds were indeed members of the Bryan's Shearwater species. The Ministry of the Environment subsequently included the birds in the Red List as a critically endangered "IA" species.

In the latest discovery, scientists including Kazuto Kawakami, a senior researcher at the Forestry and Forest Products Research Institute, in Tsukuba, Ibaraki Prefecture, went ashore on several uninhabited islands of the Ogasawaras during the night, and searched for the rare bird by observing its high-pitched cry.

The researchers spotted a flock of 10 Bryan's Shearwaters on Higashijima island, approximately three kilometers east of Chichijima island, on Feb. 25-26. One of those birds was holding eggs inside of its nest.

"They were the only Bryan's Shearwaters found when we searched areas of some 3 hectares," Kawakami said. "We believe that the number of the species living on the islands is extremely small.  The seabirds may be surviving on other islands," he continued, "and we need to exterminate mice as well as alien plants, to avert the risk of losing these precious birds." 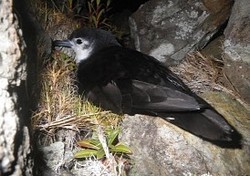 A Bryan's Shearwater takes shelter under rocks on Higashijima Island

Photograph courtesy of the Forestry and Forest Products Research Institute

For a similar news story from the Asahai Shimbun on the discovery click here.

For a press release (in Japanese) by the Forestry and Forest Products Research Institute with photographs of the birds and their breeding habitat on Higashijima Island click here.