Elizabeth 'Biz' Bell (Wildlife Management International Limited) and colleagues have submitted a report (POP2013-04) to the Conservation Services Programme (CSP) of New Zealand’s Department of Conservation on the at-sea distribution and population parameters of the ACAP-listed and Vulnerable Black or Parkinson’s Petrel Procellaria parkinsoni on New Zealand’s Great Barrier Island.

“This report is part of an ongoing long-term study of the black petrel, Procellaria parkinsoni, on Great Barrier Island (Aotea Island) that was begun in the 1995/96 breeding season.  During the 2013/14 breeding season, 410 study burrows within the 35-ha study area near Mount Hobson were checked and intensively monitored.  Of these, 266 were used by breeding pairs, 101 by non-breeding adults and the remaining 43 burrows were non-occupied.  By 1 May 2014, 185 chicks were still present in the study burrows and 2 had already fledged, corresponding to a breeding success of 70.3%.  Nine census grids were monitored within the study area and accounted for 157 of the inspected burrows and 152 study burrows, with 95 burrows being used for breeding.  Ninety-two chicks from earlier breeding seasons were recaptured within the Mount Hobson colony area this season (a total of 172 ‘returned chicks’ have been caught since the 1999/2000 season).  Analysis of the stratified census grid and mean transect data estimated that there were 2097 to 2465 birds present in the 35-ha area around Mount Hobson (Hirakimata).  Modelling of the black petrel population on Great Barrier Island (Aotea Island) was updated and indicated the population trend may lie anywhere between -2.3% and +2.5% per annum, the uncertainty being driven primarily by uncertainty over juvenile survival.  If juvenile survival is assumed not to exceed adult survival the model finds the population to be slowly declining.  Thirty-three high-resolution GPS i-Got-U™ data-loggers and 17 Lotek™ LAT1900-8 time-depth recorders were deployed between January 2014 and February 2014 on breeding black petrels to obtain at-sea distribution and foraging behaviour.  The at-sea distribution of black petrels was derived from 20 full or partial GPS tracks. Birds foraged around the northern New Zealand and towards East Cape. Foraging behaviour showed black petrels dived to a maximum of -34.3 m, with over 80% of dives less than 5 m.  The majority of dives (67%) were [sic] during the day.” 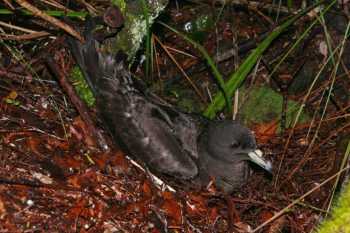 Reports made to earlier meetings of the CSP on ACAP-listed species and on mitigation activities are also available on-line (click here).