In between meetings of the ACAP Working Groups and the Advisory Committee being held in Guayaquil, Ecuador this month, 10 delegates took the opportunity to visit Isla de la Plata, 41 kilometres offshore from the fishing village of Puerto López on 27 August.  This arid 1200-ha island forms part of the 46 000-ha Machalilla National Park, which includes a 14 430-ha Ramsar Wetland of International Importance (Zona Marina Parque Nacional Machalilla, Site No. 503, designated in 1990).

Isla de la Plata (it has been described as the "poor person's Galapagos") is the only locality where the Critically Endangered Waved Albatrosses Phoebastria irrorata has been recorded breeding outside the Galapagos Islands.  The limited information available suggests that no more than 10 pairs breed, but long-term data are stated to be too sketchy to assess population trends.  In 2001, three adults were seen with no evidence of breeding. 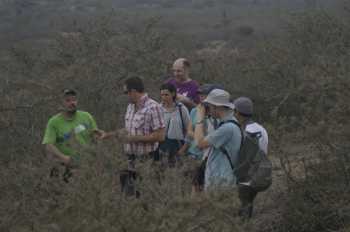 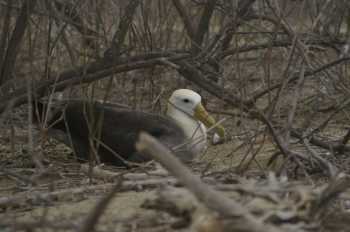 With thanks to Colin Miskelly for information and photographs.