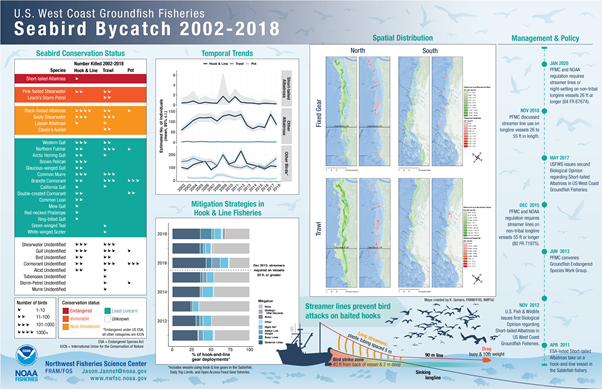 Infographic from the report

“The California Current marine ecosystem on the U.S. West Coast (Washington, Oregon, and California) supports a diversity of marine organisms, including seabirds. This report summarizes interactions between U.S. West Coast fisheries and seabirds, and presents estimates of fleetwide seabird bycatch—based on data from fisheries and federal observer programs—for the years 2002–18.

A total of 47 bird species interacted with or were sighted in these fisheries over the 2002–18 period, up from 41 in the last report). Thirteen species are considered endangered, threatened, vulnerable, or near-threatened by the U.S. Endangered Species Act (ESA) or the International Union for Conservation. The remaining 34 species are not listed, or are categorized as “least concern” (i.e., not at risk).

Hook-and-line fisheries account for the largest number of albatrosses taken among the three gear categories (hook-and-line, trawl, pot). Over the last six years, hook-and-line fisheries accounted for 50–63% of seabird mortality, followed by trawl fisheries at 31–45%, and pot fisheries at 2–6% of bycatch. The largest number of albatross taken comes from limited entry (LE) sablefish vessels fishing hook-and-line gears. This prompted regulations requiring streamer lines on hook-and-line vessels fishing in U.S. West Coast groundfish fisheries; these were implemented in December 2015 for vessels 55 ft or longer. Beginning in January 2020, all vessels 26 ft or longer fishing with hook-and-line gear north of lat 36°N must use streamer lines during daylight hours (1 hr before sunrise to 1 hr after sunset). Alternatively, night-setting (1 hr after sunset to 1 hr before sunrise) can be used to reduce seabird bycatch on hook-and-line vessels in lieu of streamer lines.

Bycatch of nonalbatross species is generally split evenly between hook-and-line and trawl gears. Seabird mortality is likely underestimated on trawl vessels, because seabirds can be killed or injured by striking cables that exit aft of the vessel during trawling. These cables are not routinely monitored in these fisheries. Significant levels of bycatch, especially of albatross, have been recorded in similar trawl fisheries around the globe. In this report, we provide estimates of seabird mortality by cable strikes in the at-sea hake catcher–processor fleet. Pot gears appear to catch very few seabirds.

In earlier versions of this report we used ratios to estimate seabird bycatch. In the previous report), we implemented an improved method for bycatch estimation. We applied Bayesian models to estimate total bycatch and associated error for fisheries with less than 100% observer monitoring. These methods have been used with other rare bycatch species, including cetaceans, delphinids, pinnipeds, sea turtles, and sharks.). The Bayesian method better estimates uncertainty and provides fleetwide estimates even in years when no seabird mortality was recorded by fisheries observers.

In the previous report, we assumed the estimated bycatch rate, q, was constant through time. In this report, we explicitly test for constant bycatch rate. We also compare models using alternative measures of fishing effort (number of gear deployments, number of gear units, amount of landed catch) and alternative distributions of the bycatch process (Poisson versus negative binomial). The results presented here represent the optimal model when comparing these parameters.”