The Flesh-footed Shearwater Puffinus carnepeis along with several shearwaters of the genus Puffinus and Calonectris has been identified by ACAP as a potential candidate for listing within the Agreement (Cooper & Baker 2008, Cooper 2010).

There are two populations of the Flesh-footed Shearwater - one largely confined to the Indian Ocean, and another to the Pacific Ocean.  Both populations breed in the southern hemisphere over the Austral summer and migrate to the northern hemisphere in the non-breeding season.  Most research to date has focused on the Pacific population, which breeds on Australia's Lord Howe Island and in New Zealand.  The Indian Ocean population breeds on French St Paul Island (500 pairs) and on a number of islands along the Western Australian coast.

The species is known to be at risk from longlining in Australian waters.  The mean number of birds killed in Australia's Eastern Tuna and Billfish Fishery from 1998 to 2002 has been estimated as 1794-4486 birds a year (Baker & Wise 2005).

Concern has been expressed about a decline in breeding numbers at Lord Howe Island, surveyed as 17 462 breeding pairs in 2002 (Priddell et al. 2006).  A rodent eradication programme has been drawn up for this island (Lord Howe Island Board 2006) and is currently under consideration.

Research has also been conducted on the Flesh-footed Shearwater at its Western Australian breeding sites (Powell et al. 2007, Powell 2009) and on its population size in New Zealand, estimated as about 10 000 pairs (Baker et al. 2010). 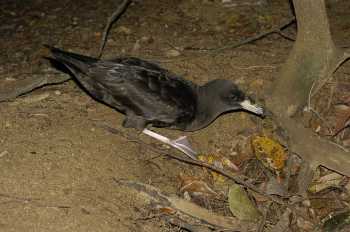 Gaze, P. 2000.  The response of a colony of Sooty Shearwater (Puffinus griseus) and Flesh-footed Shearwater (P. carneipes) to the cessation of harvesting and the eradication of Norway Rats (Rattus norvegicus).  New Zealand Journal of Zoology 27: 375-379.