Who is the world's oldest albatross? Wisdom is now catching up with the late Grandma! UPDATED

Wisdom was observed in her usual location incubating an egg and is at least 59 years old .  She was banded as a breeding adult incubating an egg at the same locality on Midway by Chandler Robbins of the Patuxent Wildlife Research Center, USA in December 1956.  Robbins estimated that the bird was a minimum of five years old at the time.  Last year Wisdom and her mate successfully fledged a chick. 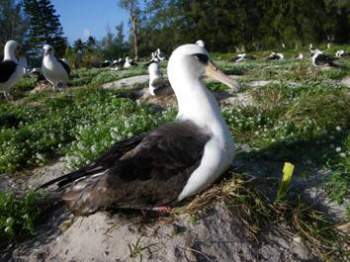 The oldest known Laysan Albatross: "Wisdom" incubating on Midway.  She carries a red colour band (visible in the picture) with the number Z 333 that was fitted in 2006.  The original worn metal band was replaced in February 2002 by Chan Robbins.  Photograph by U.S. Fish & Wildlife Service

on the Otago Peninsula of South Island, New Zealand and was named "Grandma" (click here for information on the DVD on her life).  She reached a banded age of 51.5 years and an actual age of at least  60 years, regularly raising chicks until the year she disappeared.

Midway forms part of the Papahānaumokuākea Marine National Monument, which has now been submitted for World Heritage status, to be considered later this year (click here).

Read about Wisdom's 2009 breeding session at

http://www.fws.gov/pacific/migratorybirds/digitaljournal/albatrossjournal.html.  Scroll to: "Wisdom is Back! -- February 11, 2009".

Click here for an earlier news story on this web site.