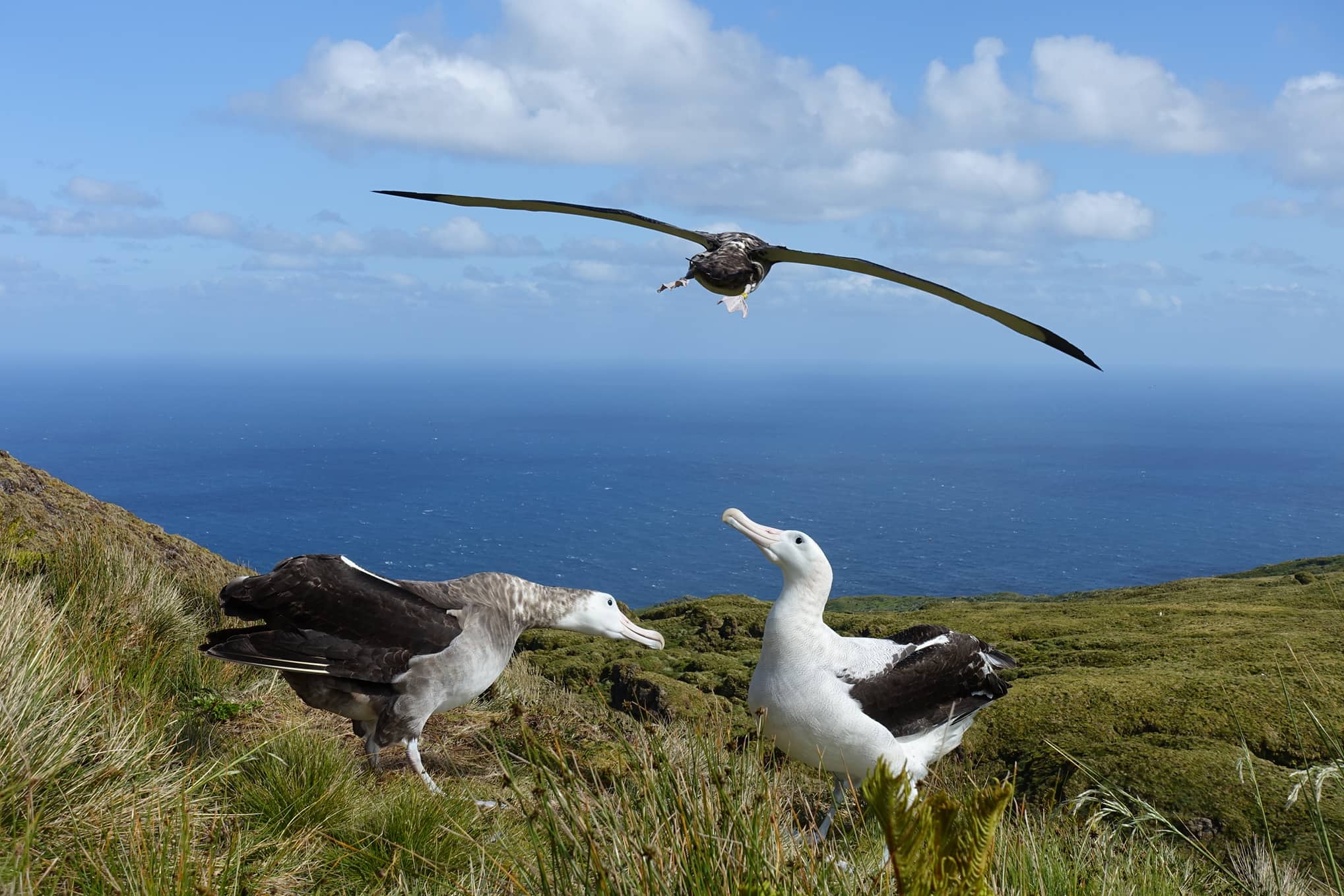 Over the austral summers of 2006/07 and 2007/08 I, with companions, lived on Gough Island in the South Atlantic, staying in the South African meteorological station just above the sea cliffs in Transvaal Bay. A major activity of our work on the island was to establish a long-term monitoring study of the ACAP-listed and Critically Endangered Tristan Albatross or Gony Diomedea dabbenena.

As has become well known, this albatross, a near endemic to the island, is at risk of extinction from the “double whammy” of longline mortality of juveniles and adults at sea, and poor breeding success due to attacks on downy chicks by the island’s introduced House Mice Mus musculus on land.  Fortunately, the latter problem is soon to be addressed, with the sailing to Gough this week of the New Zealand-registered expedition yacht Evohe, carrying an advance team which will start preparations for the eradication effort intended to take place in June and July this year.

The nearest locality with a suitable population of Tristan Albatrosses to the station is in Gonydale, a valley nestled between hills and mountains on three sides and best accessible by a two-hour or so climb up a path alongside the Gony River that reaches the valley in an undulating area known as the Hummocks.  The lower slopes of Gough are well vegetated with grasses, sedges, bracken and ferns forming an unbroken carpet.  The ground as one climbs to Gonydale has many holes in the peat dug by burrowing petrels, mostly unseen among the verdant vegetation, which tends to make the narrow path worn by passing feet invisible as well - all leading to many tumbles.

We made the climb many times in the two summers, first hauling up camping equipment and marker poles made out of plastic electrical piping, and then visiting to metal and colour band the incubating adults, marking their nests and taking their photographs (along with bill measurements) to aid in assigning gender.  It was necessary to make repeated visits to band and photograph partners as nest changes occurred.  Setting up the study took two summers because the Tristan Albatross is primarily a biennial breeder and we needed to record members of both the ‘A’ and ‘B’ populations.

There was ample time on the climbs to Gonydale to think of the work being undertaken – and of many other things as well.  The poem below, in the loose form of a 14-line sonnet, illustrated by the photographs of biologist Michelle Risi who is currently on the island, was one outcome of my musings while climbing to help conserve the Tristan Albatross. 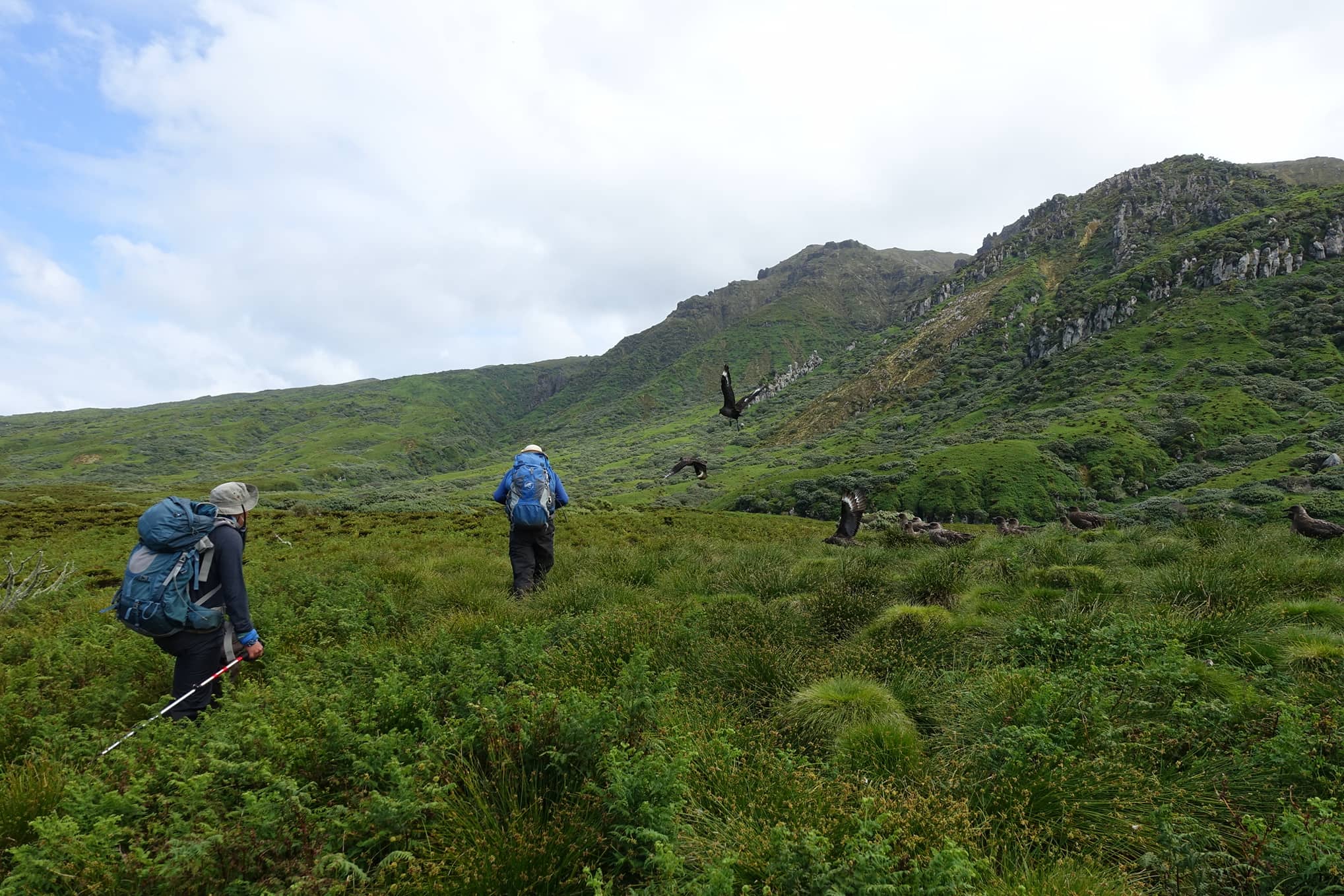 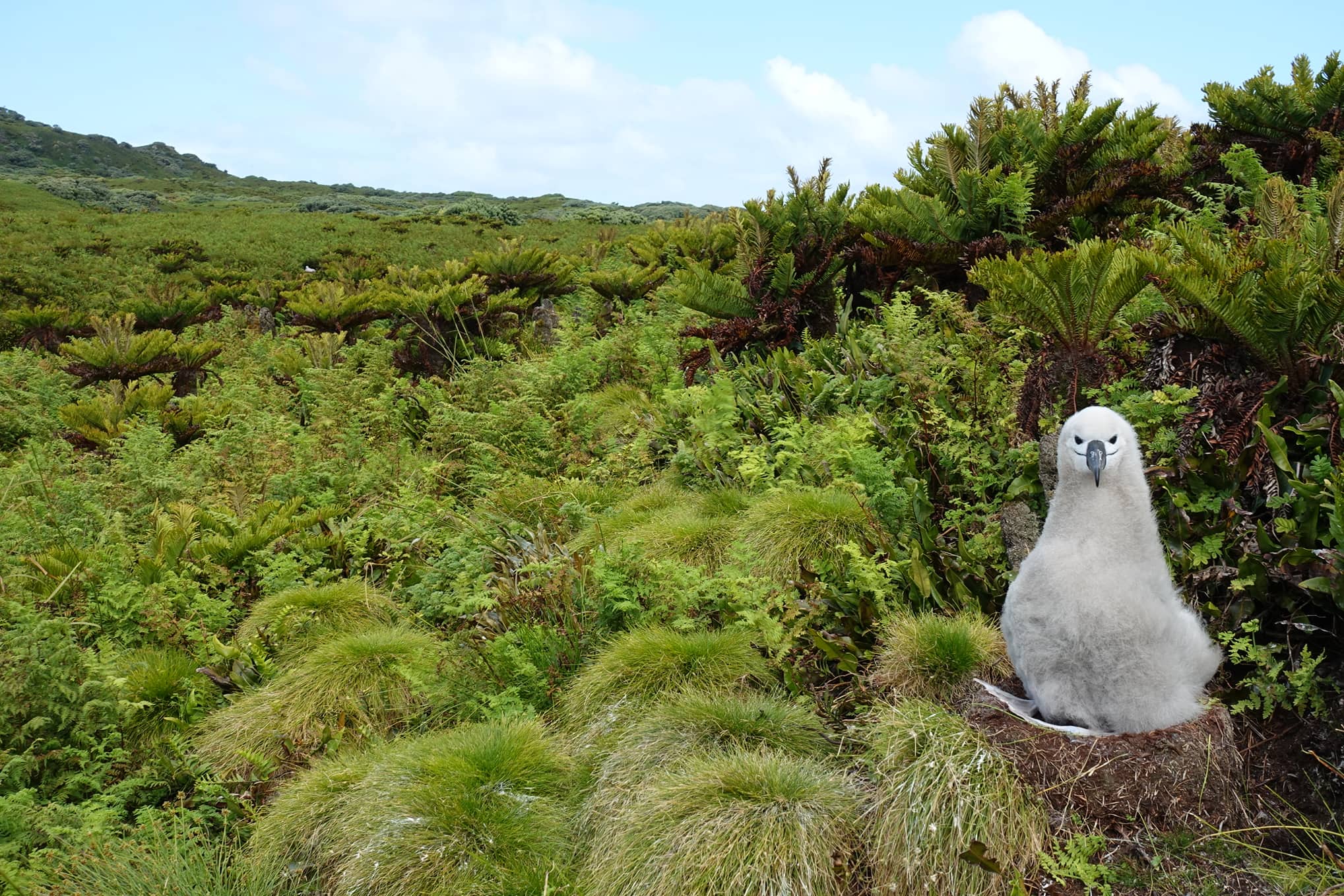 There is little talking on the way
Brow sweat our silent language of the day
We stop to drink, but then prevail
For gonies await us in their dale! 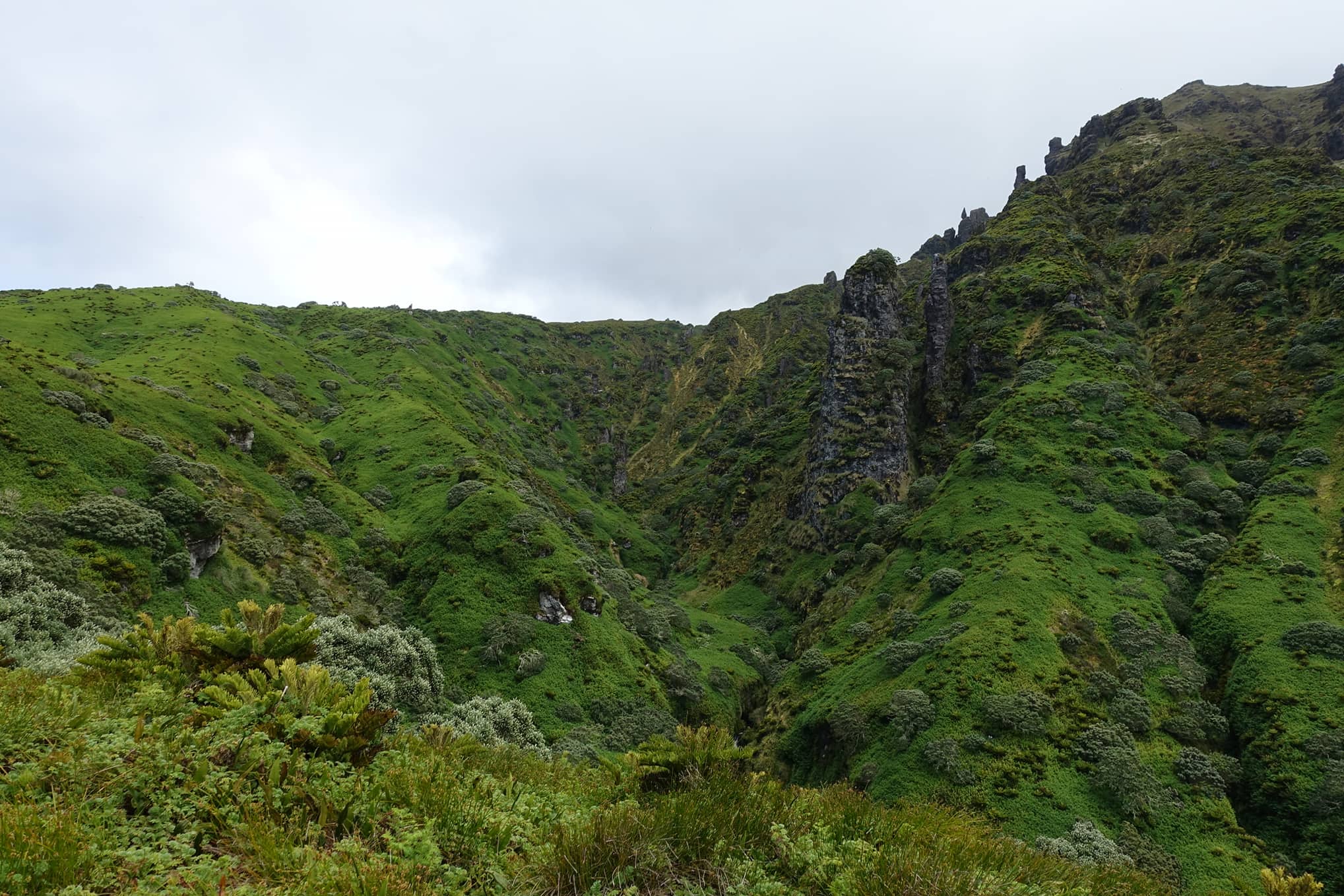 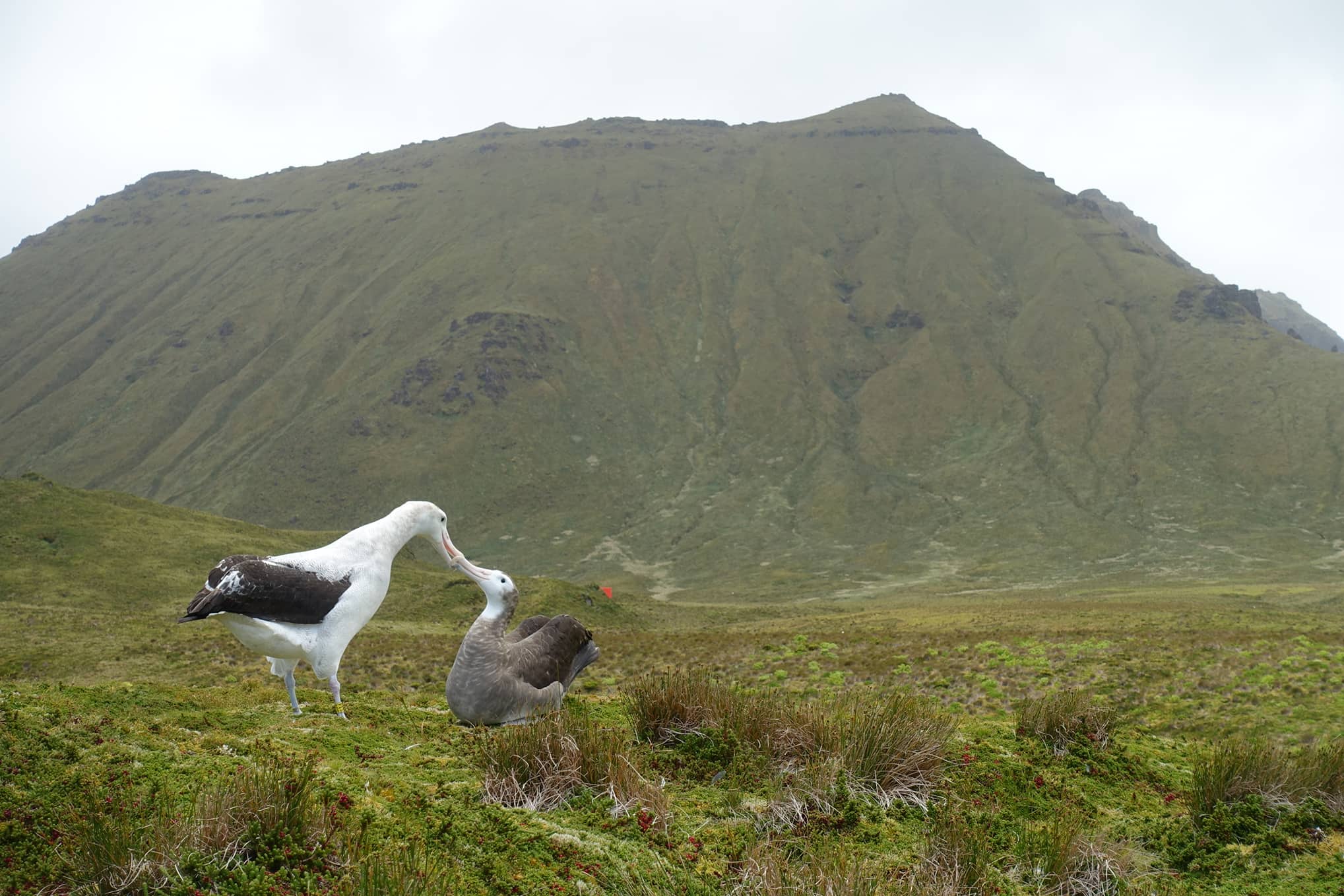 With thanks to Michelle Risi (who has climbed to Gonydale many times) for her photographs.