Two-egg clutches in albatrosses are rare but are not unknown for several species.  For Atlantic Yellow-nosed Albatrosses Thalassarche chlororhynchos they have been recorded at levels (0.1-1.0%) higher than for several other albatrosses.  They are thought always to be due to two females laying eggs in the same nest, and never due to a single female laying two eggs in a single season.

Chris Jones and Michelle Risi, field researchers currently on Gough Island with the University of Cape Town’s FitzPatrick Institute, have reported to ACAP Latest News on the unusual case of a two-chick brood for the species as follows.

A CatTraQ GPS tracker was deployed on a female Atlantic Yellow-nosed Albatross (sexed assumed from culmen measurement) on a nest containing two eggs on 17 November last year.  On 3 December the assumed male was observed to be brooding two chicks.  The tracker was removed from the female on 9 December while it was sitting next to the brooding male.  The two chicks were together in the nest bowl until at least 15 December when they were photographed.  By 19 December the smaller of the two chicks had fallen out of the nest and by 21 December the nest site was deserted. 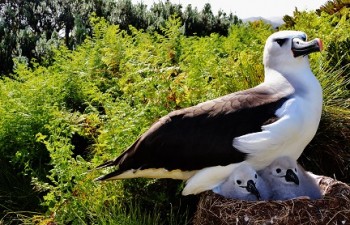 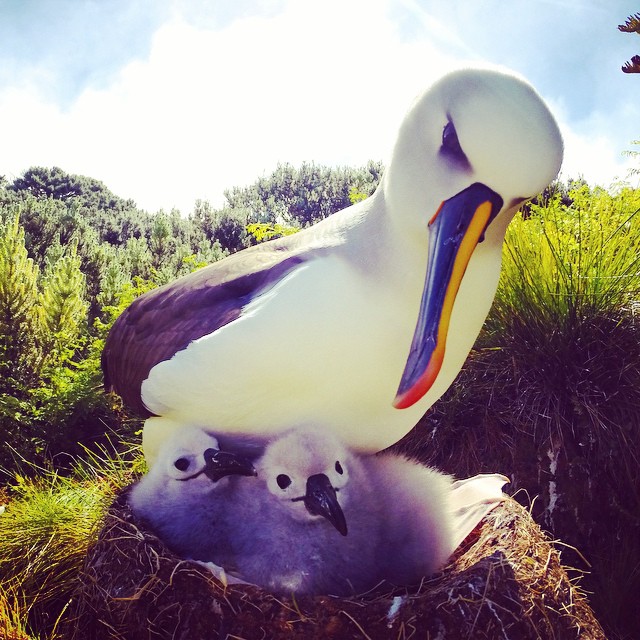 There is a single previous published record of two Atlantic Yellow-nosed Albatross chicks in the same nest, with one chick dying during hatching that was observed on Inaccessible Island.  Whether the remaining, and older, chick survived to fledging was not reported.  The Gough observation is thus still the first record of the species managing to successfully hatch two eggs in the same nest.

Apparent two-chick broods have been occasionally reported for Laysan Albatrosses Phoebastria immutabilis but this seems to be mainly due to a neighbouring chick “moving in” and becoming adopted once old enough to walk away from its own nest site, rather than as a result of two eggs being laid in the same nest.  Their often tall pedestal nests would presumably not allow this to happen with Atlantic Yellow-nosed Albatrosses, or likely, with any other mollymauk albatross of the genus Thalassarche.

Two-egg clutches have been reported for both Laysan and for Short-tailed P. albatrus Albatrosses from time to time as a result of female-female pairs.  These eggs are usually infertile and one of them is often lost early on in incubation (click here).  However, Hob Osterlund has reported to ALN: “a few years ago there was a two-chick LAAL [Laysan Albatross] nest on Kauai.  F-F [female-female] parents, both eggs candled as fertile, chicks hatched in same nest.  Neither survived to fledge.” 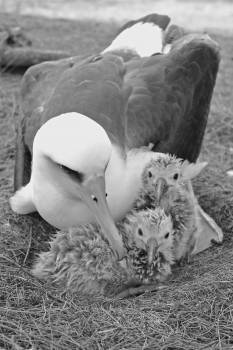 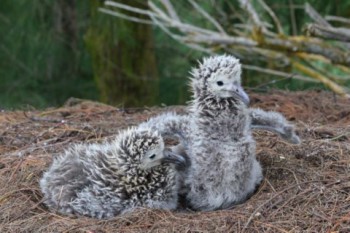 It seems probable that rearing two chicks to fledging is not possible for a single albatross pair; certainly it seems that it has not been recorded.  But if a case comes up, ALN will report it!

With thanks to Chris Jones, Margaret Koopman, Hob Osterlund, Michelle Risi and Peter Ryan for information and photographs.