Jacopo Cecere (ISPRA - Institute for Environmental Protection and Research, Ozzano dell ’Emilia, Italy) and colleagues have published in the journal Ibis on the foraging habitat preferences of Scopoli’s Shearwaters Calonectris diomedea in the Mediterranean Sea.

“The distribution of seabirds at sea is influenced by physical, ecological and anthropogenic factors such as sea depth, prey distribution, intra-specific competition and commerical [sic] fishing activities.  We quantified the foraging habitat preferences of Scopoli’s Shearwater Calonectris diomedea in the Mediterranean Sea. We analysed habitat preferences in relation to a suite of physical and ecological variables including sea depth, net primary production and distance to other colonies (as a proxy of intra-specific competition).  Since the Mediterranean is heavily impacted by commercial fisheries, we also incorporated the distance to fishing harbours in our analyses as a proxy of the availability of discards which are a potential feeding source for Scopoli’s Shearwater.  Foraging birds preferred shallower waters and avoided areas close to other colonies, thereby reducing interactions with conspecifics.  We also found that long-distance trips were undertaken to areas close to fishing harbours, suggesting that these represented particularly profitable locations to compensate for the greater travelling costs involved.  No differences in foraging between the sexes were recorded.  This study improves our understanding of the at-sea distribution and habitat preference of a seabird inhabiting the over-exploited Mediterranean Sea.  Our results support growing evidence that seabirds exhibit complex relationships with commerical fishing activities, which must be considered when planning conservation programmes.” 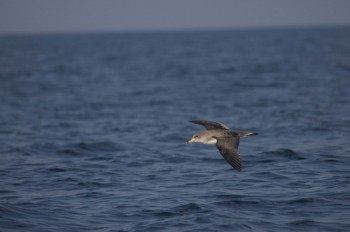