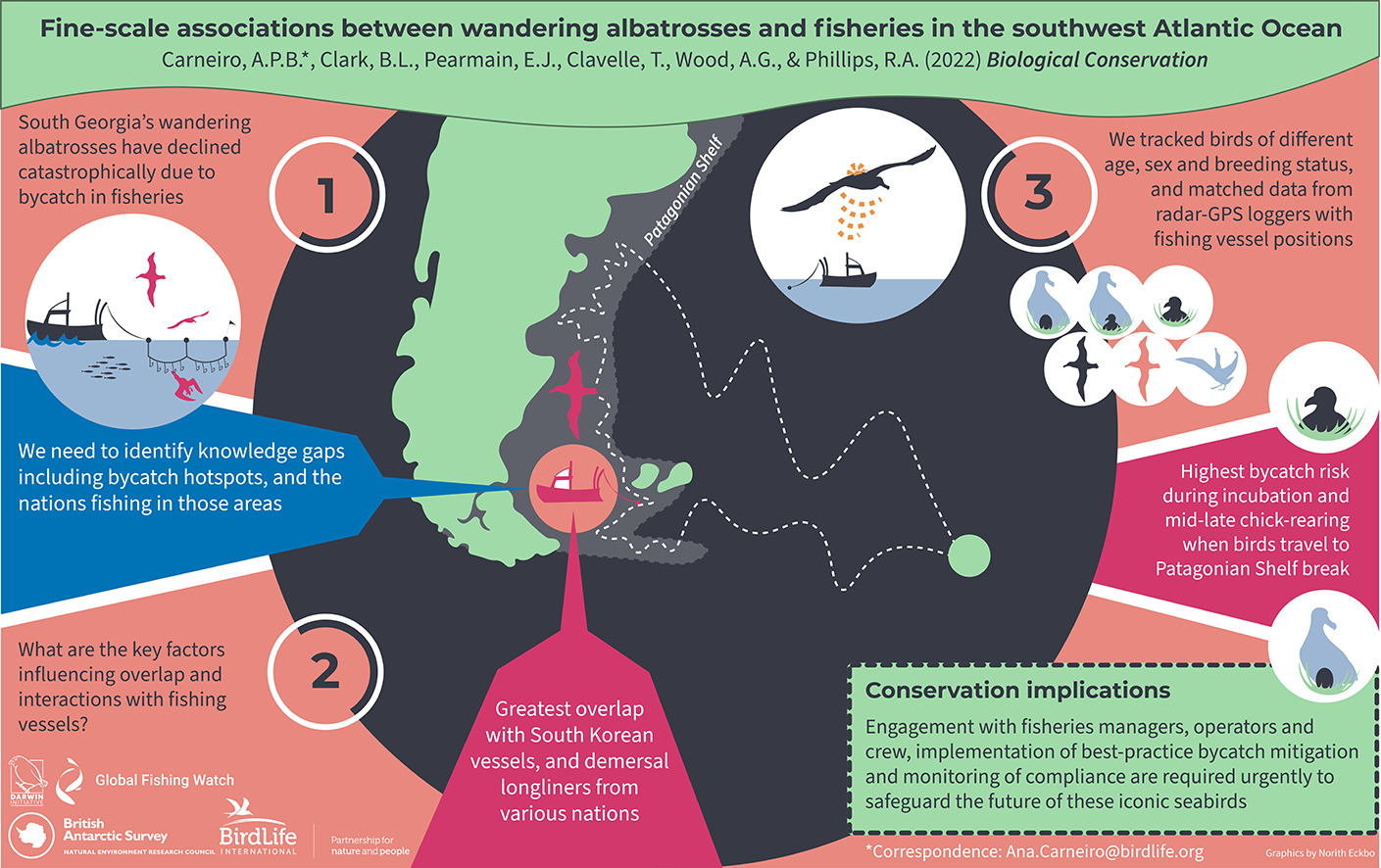 A graphical abstract of the paper, Fine-scale associations between wandering albatrosses and fisheries in the southwest Atlantic Ocean

New research published open access in the journal Biological Conservation on the globally Vulnerable Wandering Albatross Diomedea exulans breeding on Bird Island in the South Atlantic has revealed 55% of tracked birds encountered fishing vessels when foraging, putting them at high risk of bycatch.

The study, which focuses on Wandering Albatrosses’ interactions with fishing vessels, used GPS devices to track 251 of the birds and cross-referenced their movements with known locations of fishing vessels.

“These detailed analyses provide us with a much more nuanced idea of where the risks are, allowing us to target our conservation efforts much more effectively,” says Richard Phillips, Seabird ecologist at British Antarctic Survey, and co-author of the study.

Lead Author of the study and Marine Science Manager at BirdLife International, Ana Carneiro and Seabird ecologist at British Antarctic Survey and co-author, Richard Phillips speak about the research and its findings

The paper’s abstract as follows:

"Bycatch is a conservation concern for marine biodiversity, including seabirds. Analyses of spatio-temporal overlap are an important tool for identifying areas and periods where birds are most at risk, but until recently were only possible at coarse scales using aggregated data on fishing effort. Here, we integrated data from loggers that record GPS positions of birds at sea and scan the surroundings to detect vessel-radar transmissions, with the positions of fishing vessels obtained from the automatic identification system, to identify areas, gear types and flag states representing most bycatch risk for wandering albatrosses (Diomedea exulans) of different life-history stages and sexes. We recorded 157 foraging trips of adult breeders, and 34 tracks of sabbatical breeders, 29 immatures and 31 juveniles. Overall, 55 % of birds encountered and 43 % of birds visited fishing vessels (i.e. were within 30 km and 5 km, respectively). Fine-scale overlap was particularly high for breeders during incubation and post-guard chick-rearing when birds travelled to the Patagonian Shelf break. Only 23 % of all encounters involved vessel visits. Our study found the greatest overlap was with set (demersal) longliners, particularly those from South Korea but also including the Falkland Islands, United Kingdom and Chile, and to lower extents, trawlers flagged to Argentina and Uruguay, and drifting (pelagic) longliners flagged to Brazil, Portugal and Taiwan. These fleets vary greatly in terms of bycatch rates. This study highlights the importance of covering the full range of life-history stages, and the advantages of vessel-detecting loggers and fine-scale analyses for improving risk assessments."

A British Antarctic Survey article on the paper is available at their website (link).