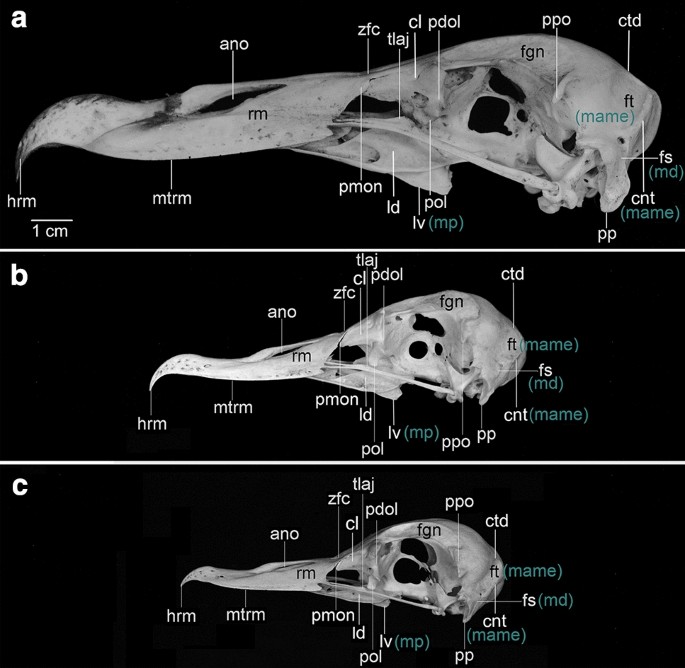 From the publication giant petrel skull at the top

Fulmarine petrels are top predators in the Antarctic region preying mostly on squid, fish, and carrion. Their diets have been widely studied, but less is known about the role of skeletal structures in the processes they use to obtain food. Here, we comparatively describe the skulls of fulmarine petrels, namely, the Giant Petrels (Macronectes), the Southern Fulmar (Fulmarus glacialoides), and the Cape Petrel (Daption capense), emphasizing those structures associated with the muscles responsible for opening/closing the jaws. The skull is dorsoventrally flattened and the bill is hooked-tipped and elongated in the studied species, but we found significant differences for relative bill length and relative cranium depth among them. These characteristics can be related to surface seizing and streamlining for diving and pursuing/capturing prey underwater. Longer bills also indicate that the mandible muscles are more posteriorly positioned relative to the bill tip, an adaptation for a fast bite, which is more pronounced in Giant Petrels. Nevertheless, there are broad areas of origin for the mandible muscles in the fossa musculorum temporalium and in the Os palatinum, especially in Giant Petrels. We thus infer that those muscles are well developed and hypothesize that, despite the adaptation for fast movements, their jaws are still capable of a relatively powerful bite. The Giant Petrels and Cape Petrel present a similar pattern of dorsoventral flattening of the skull, an adaptation for diving in pursuit of prey. In Giant Petrels, a flattened skull with a hooked-tipped bill also facilitates their feeding behavior of inserting the bill and head into carcasses for tearing flesh. We conclude that fulmarine petrels present variable morphological characters adapted to the different feeding strategies they employ in the Antarctic and the Southern Ocean.”