Featuring ACAP-listed species and their photographers: the Grey Petrel by Jeremy Bird 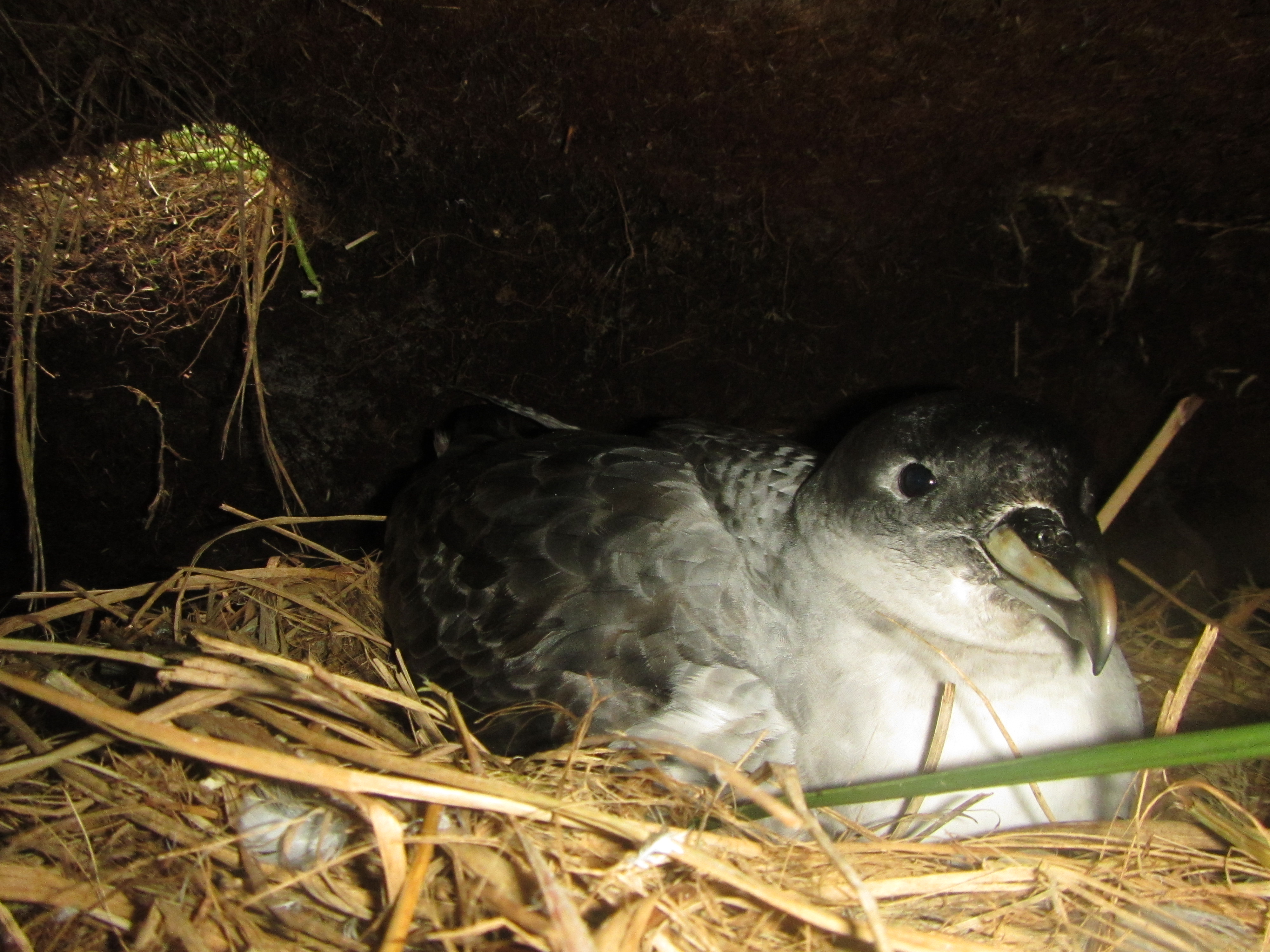 An incubating Grey Petrel in its burrow on Macquarie.  Burrows were visited throughout the season to estimate population size and breeding success, photograph by Jeremy Bird

NOTE: This is the third in an occasional series that aims to feature photographs of the 31 ACAP-listed species, along with information from their photographers.  Here, Jeremy ‘Jez’ Bird writes about the ACAP-listed and globally Near-Threatened Grey Petrel Procellaria cinerea, a species he studied for his recently awarded PhD. 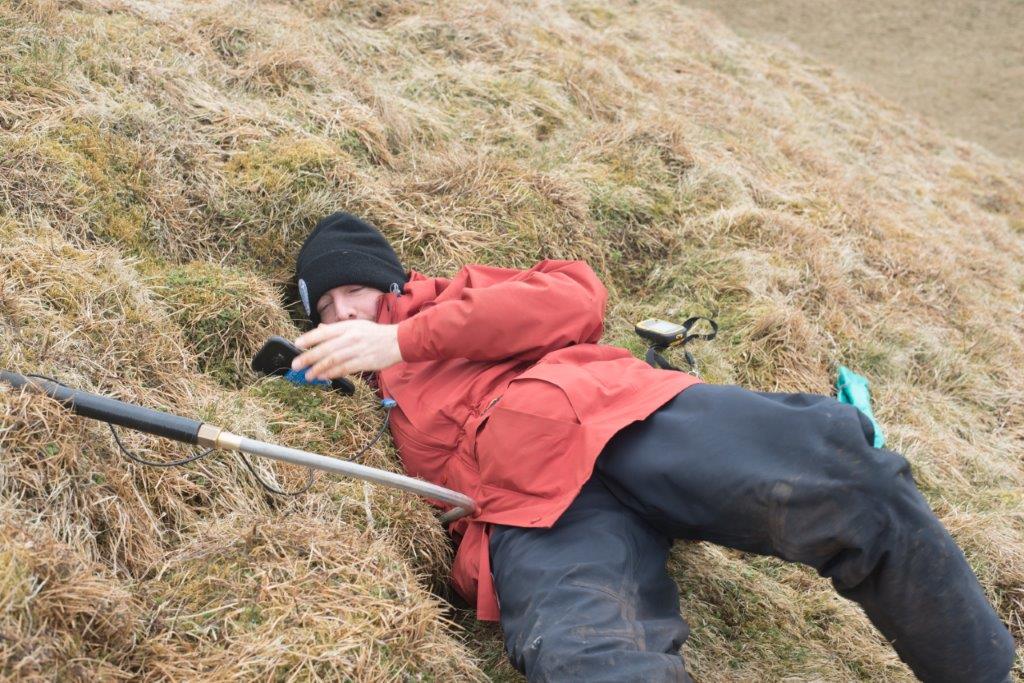 The Southern Ocean islands are out of sight and out of mind for most of us, but they support some amazing wildlife and I’ve been passionate about the region since visiting on a travel scholarship as an 18-year-old.  Twenty years later, still inspired by that first experience, I’ve just completed a PhD studying the recovery of threatened seabirds on Macquarie Island, Australia.  This sub-Antarctic island is currently responding to the removal of invasive predators.  Pest management began with the eradication in 1998 of the Weka Gallirallus australis , a globally Vulnerable species of rail native to New Zealand which was originally introduced as a food source for sealers, followed by feral cats in 2000 and rabbits, rats and mice in 2011. 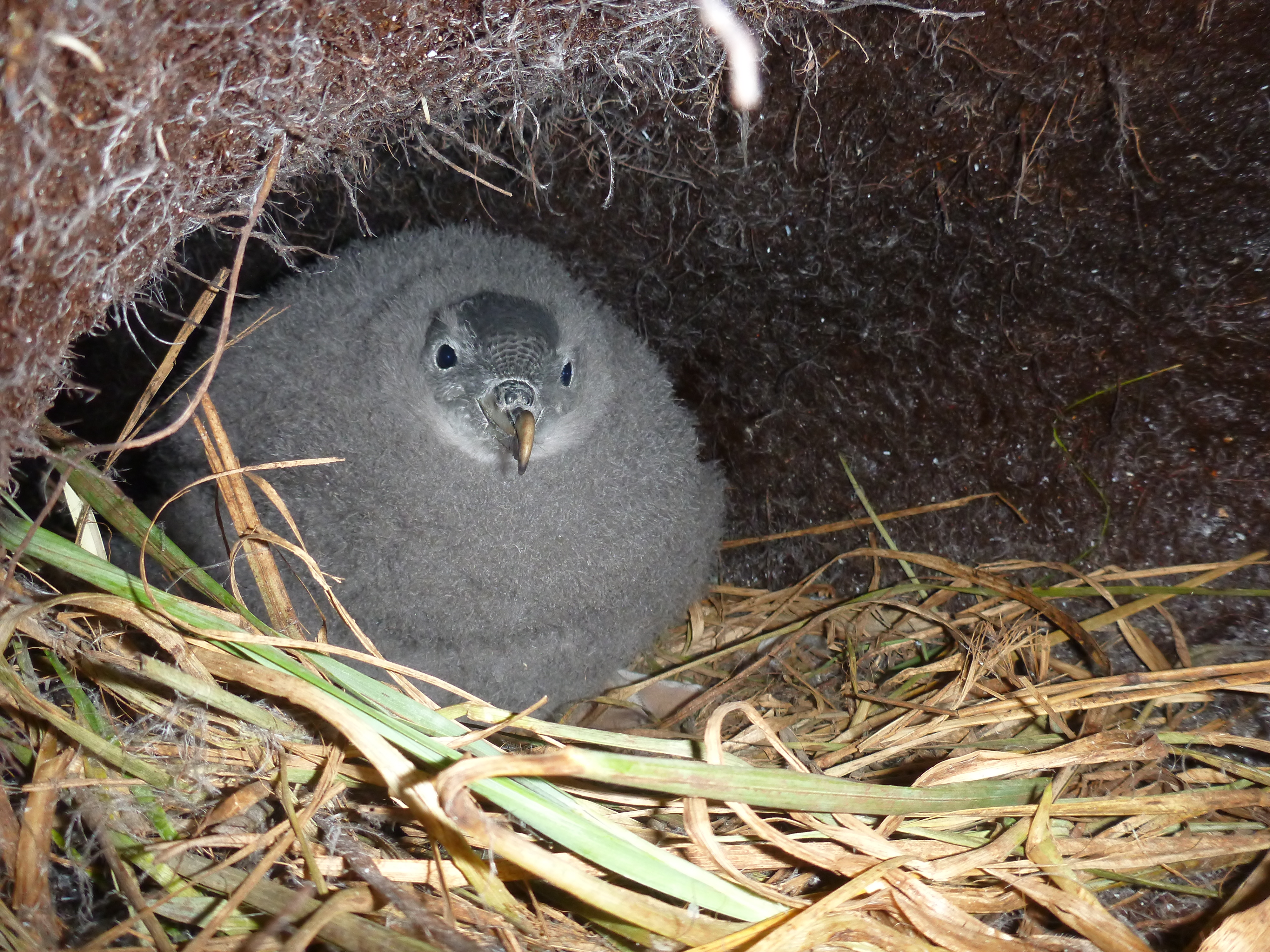 A Grey Petrel chick starts to lose its down, photograph by Jeremy Bird

Among the birds I studied was the Grey Petrel.  Found on a number of sub-Antarctic islands, the largest recorded population is on Antipodes Island south of New Zealand.  Grey Petrels were reported historically on Macquarie Island, but there was no evidence of breeding after the early 1900s.  In the 1990s, when the cat population was under control and on its way to eradication, Grey Petrels recolonised.  No island-wide surveys of the population had been undertaken since 2003 although the Tasmania Parks and Wildlife Service has continued monitoring at some core breeding sites.  I completed a whole-island survey and found the population has increased to c. 250 breeding pairs today.  Based upon the current population size and trajectory we expect them to warrant removal from Australian state and federal threatened species lists within the next few years. 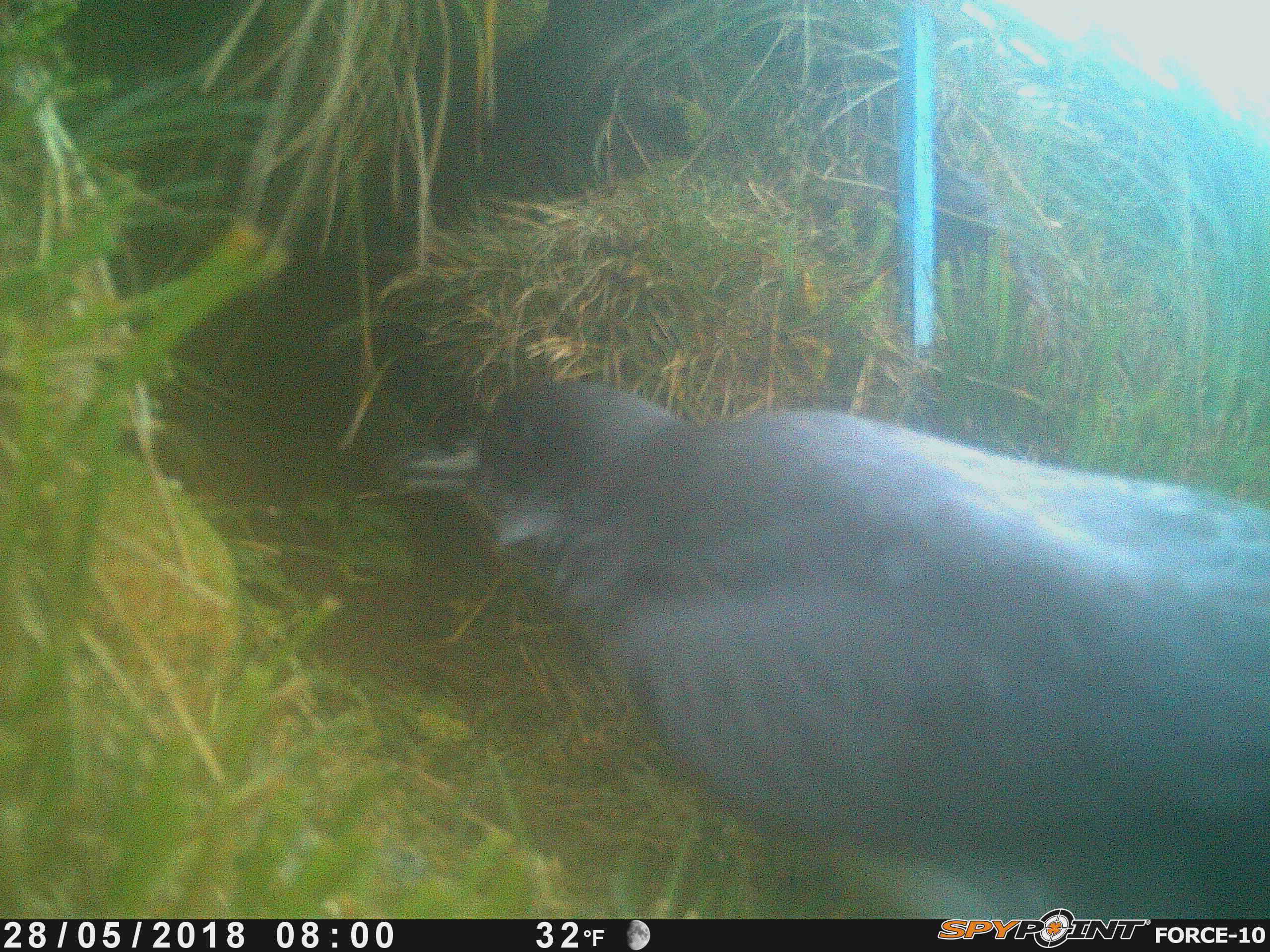 Petrels are notoriously difficult to study.  They typically breed on remote islands, often in rugged terrain.  Birds only frequent colonies in certain seasons, and they with few exceptions only visit their nesting burrows at night to avoid native avian predators such as skuas.  They mostly nest in underground burrows whose entrances can be obscured under dense vegetation.  As a result, much of my year was spent searching for and counting burrows, and then trying to figure out what was in them.  I used a dedicated ‘burrowscope’ to help with this and used camera traps to record activity at individual nests.  By following nests through the season I found that almost 80% of nesting attempts were successful – way higher than when invasive species are present, as for example on Macquarie in the past and currently on South Africa’s Marion Island where Grey Petrels remain at risk to House Mice (click here).

We also deployed geolocator tags on a number of birds.  These tags were attached to the legs and retrieved the next season when the birds returned to their breeding burrows.  Using an internal clock, each day the tag logs sunrise and sunset whose timings tell us longitude, whereas day length tells us latitude.  We are now using this information to illustrate potential overlap of Macquarie’s Grey Petrels with fisheries throughout their at-sea range, and to understand better their population structure.  For example, we know the recolonizing Grey Petrels have arrived from Macquarie from elsewhere and the rate at which the island population is growing suggests immigration is still occurring, but we don’t know where the source population is.  As the impact of climate change in the Southern Ocean intensifies understanding how connected species’ populations are and what capacity they have to move help decisions over island management to be made. 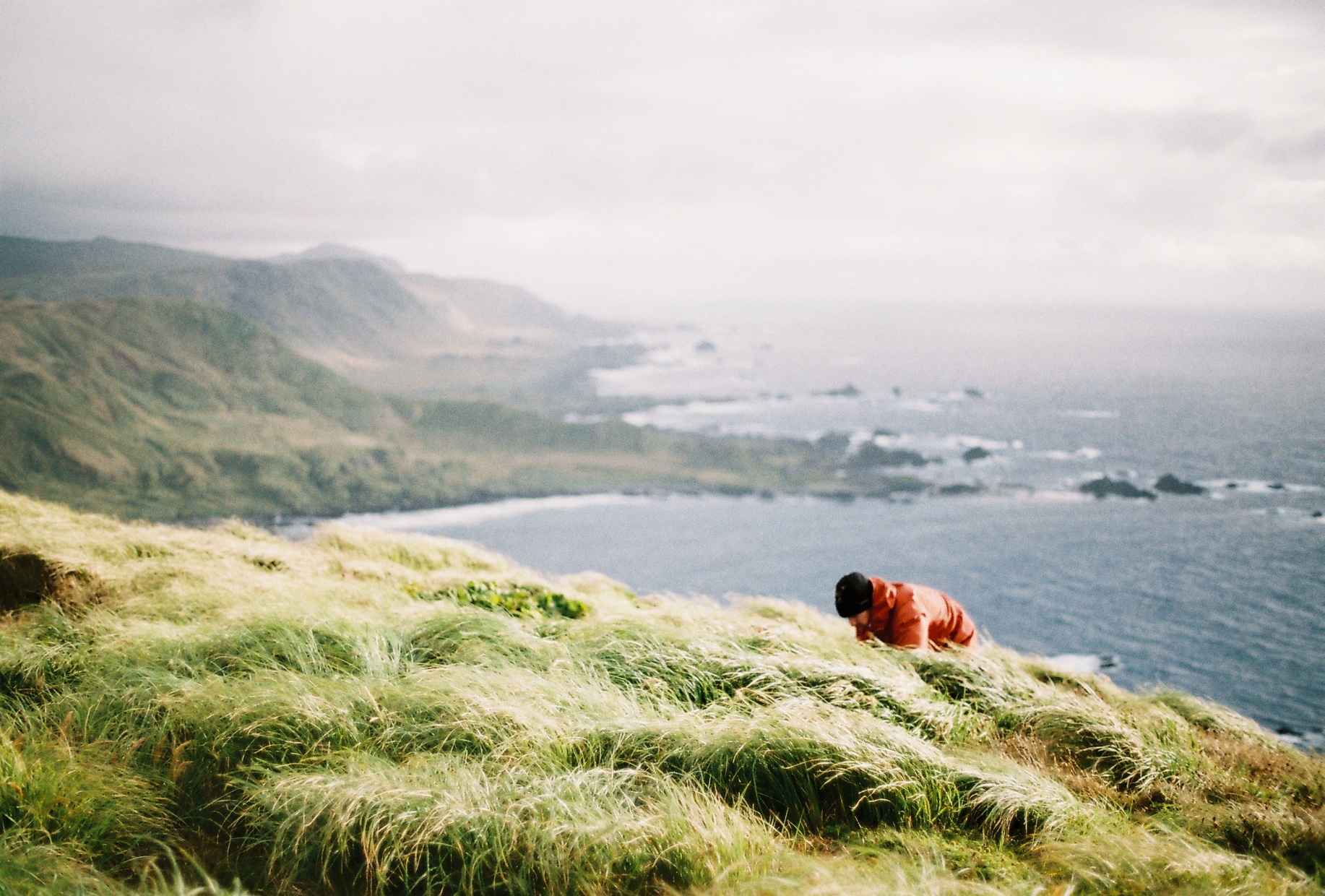 I spent most of my year on Macquarie Island searching for seabird burrows and trying to figure out what was in them, photograph by Toby Travers

I loved immersing myself in the lives of these birds for a year.  Learning from remote recording devices when they first arrived back at their colonies. Reading how males sit atop tussock heads and ‘hose’ their staccato calls at the night, before waiting after dark to see it for myself.  Watching hatching chicks, still wet and complete with egg tooth, gradually grow and transform into sleek fledglings, seen disappearing for the last time as I flicked through camera trap photos.  Following the annual cycle of Grey Petrels on Macquarie has given me immense enjoyment and respect for the hardships they endure year in year out.

Much of my work reported here can be found in my two recent papers and in my thesis which has just been published online.