Attracted to the bright lights: Wedge-tailed Shearwater fallout in Hawaii 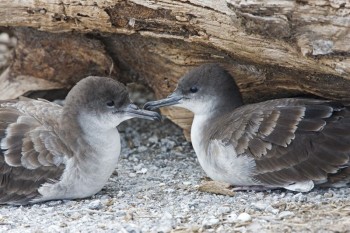 “Seabird fledglings are often attracted to artificial, bright lights, leading to their grounding.  This phenomenon is termed “fallout” and is associated with an increased risk of mortality from land-based threats.  This study evaluated temporal trends and spatial factors, such as fallout clustering near lights and proximity to colonies, to inform targeted management actions.  Standardized surveys were conducted from 2002 to 2010 for Wedge-tailed Shearwater Ardenna pacifica (WTSH) fallout on the island of Oʻahu, Hawaiʻi, USA.  First, yearly fallout counts along the transect showed a two-year cycle and identified 25 November as the date with the highest fallout across years.  Second, artificial lights and utility lines were present in 94% and 83% of fallout locations, leading to significantly higher fallout rates at these locations compared to random points along the transect.  Third, fallout decreased significantly as the distance from the colonies increased and was negligible farther than 5 km from the nearest colony.  Overall, 60% of all fallout occurred along a 1.7 km section of the survey route, with 27% of this fallout occurring within 8 m of two light poles, highlighting the need for targeted management.  Finally, the disposition outcomes of rescued shearwaters from non-fatal fallout were analyzed.  Among grounded individuals that were recovered alive, 78% were admitted for rehabilitation with no injury and released.  This suggests that rescue efforts during high-risk periods that are focused within 5 km of colonies, in fallout hot spots, are likely to enhance survival.  Because little is known about the environmental drivers of WTSH fallout, our results specify when, where, and how targeted management could be used most effectively to reduce fallout on Oʻahu.  Our targeted approach may be applied in other regions where seabird fledging is heavily impacted by artificial lights.”