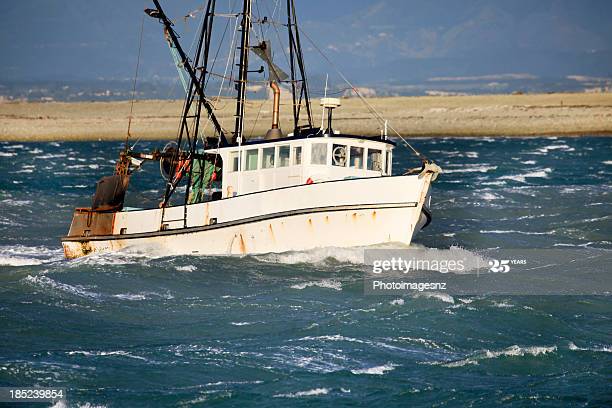 “Seabirds are incidentally captured in New Zealand commercial fisheries, including bottom-longline fisheries targeting snapper and bluenose in northern North Island.  Incidental captures of protected species, such as seabirds, are recorded by fishers and also by government fisheries observers when they are onboard commercial vessels.  Nevertheless, the rates of these incidental captures are uncertain, as fisher reported records may be incomplete and observer coverage of these bottom-longline fisheries is variable.

For this reason, a pilot electronic monitoring programme was implemented in October 2016 (the 2016–17 fishing year) in bottom-longline fisheries targeting snapper and bluenose in north-eastern North Island (the Hauraki Gulf and Bay of Plenty areas, Fisheries Management Area FMA 1).  The fisheries in this area overlap with the spatial distribution of black petrel (Procellaria parkinsoni), which has been identified as the species most at risk from commercial fisheries in New Zealand.  Black petrel breed on Little Barrier and Great Barrier islands in Hauraki Gulf during summer, and use the outer Hauraki Gulf area and pelagic waters for foraging during that time.

During the electronic monitoring programme, the haul of the catch was recorded using cameras onboard participating vessels, and the footage was subsequently reviewed.  Here, we used a modelling approach to assess whether fisher-reported seabird captures were affected by the presence of onboard cameras.

We found that the rate of fisher-reported seabird captures increased from 0.0044 birds per thousand hooks before the trial to 0.0089 birds per thousand hooks during the trial for the vessels that participated in the camera trial for the snapper target fishery. this increase of around a factor of two was also supported by a statistical analysis.  Key candidate model structures showed a positive effect of onboard cameras on the reporting of seabird capture rates: the model estimated that fisher reporting of seabird captures in the pilot programme fleet was around twice as high when vessels had onboard cameras than when they were without cameras (the median effect was 1.6 times higher when the analysis was restricted to vessels in the pilot programme, and 2.2 times higher when the whole fleet was included in the analysis). There was a 99.9% probability that the fisher-reporting rate increased during the trial for the analysis extended to the whole fleet.

To date, fisher-reported captures have not been used in the estimation of the impact of fishing on seabirds, due to the low reporting rates and potential limitations with species identification. Further data, both from observers and from an ongoing camera trial, will help to improve our understanding of variations in fisher-reporting rates in the bottom-longline fishery.”

With thanks to Robert Vagg.