Maëlle Connan (Institute for Coastal and Marine Research, Nelson Mandela University, Port Elizabeth, South Africa) and colleagues have written open access in the journal Ecography on what isotope ratios in eggshells can tell us about resource partitioning.

“A central theme in community ecology is understanding how similar species co-exist and how their interactions may evolve in the context of climate change. Most studies of resource partitioning among central place foragers, particularly birds, focus on the offspring-rearing period, when they are accessible, but breeding success may be determined earlier and little is known about how such species partition resources at the onset of breeding. We used a non-invasive approach to evaluate resource partitioning in co-existing females at a sub-Antarctic island during their pre-laying periods. Three hypotheses were tested using carbon, nitrogen and oxygen stable isotope ratios measured in shells and membranes of hatched eggs as ecological tracers: 1) resource partitioning by geographic location and trophic level will exist among the 12 bird species and will be enhanced within taxonomic groups; 2) given the absence of strong oxygen gradients in the Southern Ocean we will not detect spatial structuring based on oxygen isotopes, but differences will exist between resident and oceanic species as the former may use meteoric water; 3) capital and income breeder strategies can be differentiated using stable isotopes of egg remains.

Two and three dimensional isotopic data showed resource partitioning among species. As predicted, segregation was evident within the four main taxonomic groups: penguins, albatrosses, burrowing petrels and giant petrels. Unexpectedly, oxygen isotopes revealed widespread use of meteoric water among a suite of sub-Antarctic birds. Stable isotopes allowed us to identify females of most species as income breeders at the onset of breeding, with the exception of the females of the two crested penguin exhibiting a mix of income and capital resources use. Multidimensional isotopic analyses revealed that resource partitioning exists at multiple stages of the annual cycle in ways likely to be important under global change, exhibiting wide potential for ecosystem analysis.”

Causes of mortality of albatrosses, petrels and shearwaters stranded in north-eastern Brazil

“The aim of this work was to determine the main species of stranded seabirds at the Northeastern coast of Brazil in addition to the most frequent causes of stranding and mortality.  The study was conducted in a monitored area for three years (2012-2014), from the coastline of south Alagoas through north coast of Bahia encompassing 254 km of coast.  The seabirds found alive during the monitoring were sent to rehabilitation, clinically examined and the carcasses were removed, necropsied and histopathologically analyzed. A total of 1347 seabirds were found stranded.  Of these, 378 were found alive and sent to rehabilitation.  From the 969 dead seabirds 806 were unsuitable for necropsy, being only 163 submitted to necropsy and histopathological analysis.  Calonectris borealis, Puffinus gravis and Puffinus puffinus were the main seabirds stranded in the studied area.  Most stranding occurred from March to June with an increase during April and May for the most species of seabirds.  The main clinical signs of stranded seabirds consisted of inappetence, apathy, low body score, hypothermia, flying or movement difficulty and prolonged recumbency.  Natural causes followed by infectious diseases and anthropogenic environmental factors were the main causes of death of seabirds stranded on the Northeastern coast of Brazil.”

Atlantic Yellow-nosed Albatross - one of the beached species

Spectacled Petrels continue to do well on Inaccessible Island

“Inaccessible Island, in the Tristan da Cunha archipelago, is the sole breeding site of the Spectacled Petrel Procellaria conspicillata.  The island also supports globally important populations of four threatened seabirds, as well as populations of other seabird species.  A seabird monitoring protocol was established in 2004, following baseline surveys of most surface-breeding species in 1999.  For the species monitored, we report population trends that are based on visits in 2009 and 2018.  Populations of most monitored species appear to be stable or increasing, including three albatross species currently listed as Endangered or Critically Endangered.  However, numbers of Northern Rockhopper Penguin Eudyptes moseleyi may have decreased slightly since 1999, and numbers of Antarctic Tern Sterna vittata have decreased since 1982.  The population of Spectacled Petrels is estimated to be at least 30 000 pairs and continues to increase since feral pigs Sus scrofa died out on the island in the early 20th century.  We describe a new monitoring protocol for Spectacled Petrels that will be easier to repeat and implement and that should provide a more sensitive measure of future population changes.” 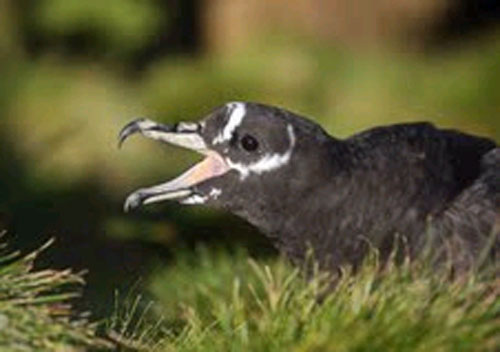 Read an earlier ALN post on the 2018 Inaccessible survey.

In 2006/07 and 2007/08 I spent two summers on Gough, a UK island in the South Atlantic, working on alien plant eradications with small teams of volunteers.  As well as this necessary work towards the island’s conservation management, we climbed into Gough’s mountainous interior to the localities where Critically Endangered (and near-endemic) Tristan Albatrosses Diomedea dabbenena breed – and where their downy chicks were being attacked and killed by the island’s introduced House Mice Mus musculus during winter months (click here).  In addition to conducting island-wide censuses of incubating birds, we also set up a long-term monitoring study of Tristan Albatrosses in Gonydale, metal and colour banding incubating adults, which we sexed by bill measurements and plumage, and staking and mapping their nests.  With a 150 or more nests to visit multiple times to record and band partners over both summers of a biennial breeder in a locality that requires a two-hour climb from the South African weather station we needed to overnight on visits using light-weight geodesic tents, back-packing in all our equipment and supplies.

Ever since these two summers a decade ago annual field teams on Gough have continued to climb to Gonydale to follow the fortunes of the colour-banded birds, re-stake nests, record the presence of eggs and band the few chicks that survived the onslaughts of the mice.  Hard, but rewarding work, camping in often cold, wet and windy conditions.

From this coming summer, however, field work will become a little easier by the placement of twin huts in Gonydale during the annual relief of the weather station last month by the South African National Antarctic Programme (SANAP) of the Department of Environment, Forestry and Fisheries.  Ben Dilley, of the University of Cape Town’s FitzPatrick Institute of African Ornithology, modified a second-hand six-metre shipping container into two field huts in Cape Town, fitting both sections with windows, doors, insulation, wooden bunks (two single beds in each hut), tables and a cooking counter served by gas in one hut.  These were shipped to the island on South Africa’s Antarctic research and supply ship, the S.A. Agulhas II and flown into the mountains by helicopter, where they were placed side by side and securely tied down with ropes to counter the island’s often savage winds. 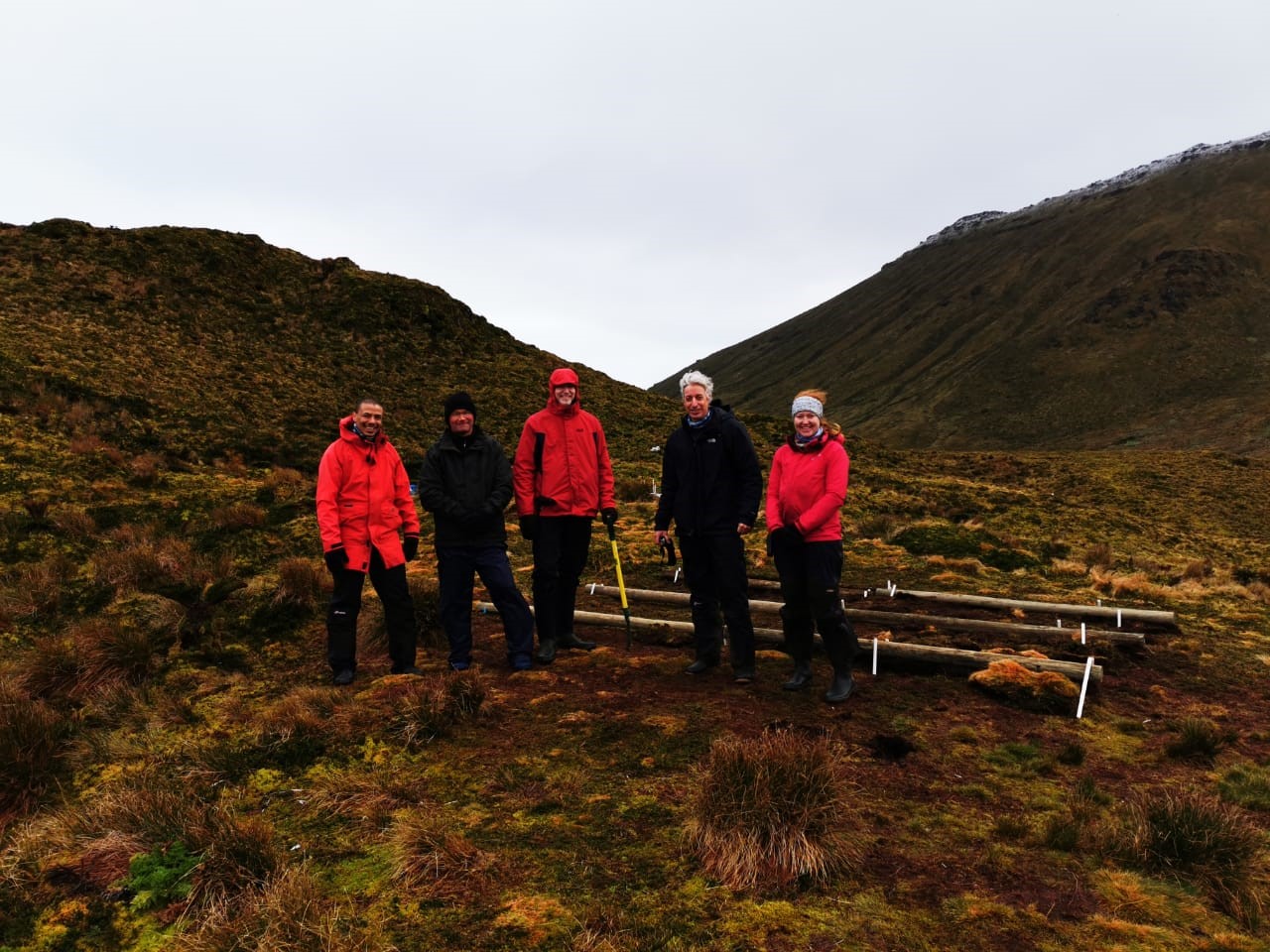 A base for the huts gets prepared in Gonydale, Green Hill (left) and West Rowett behind 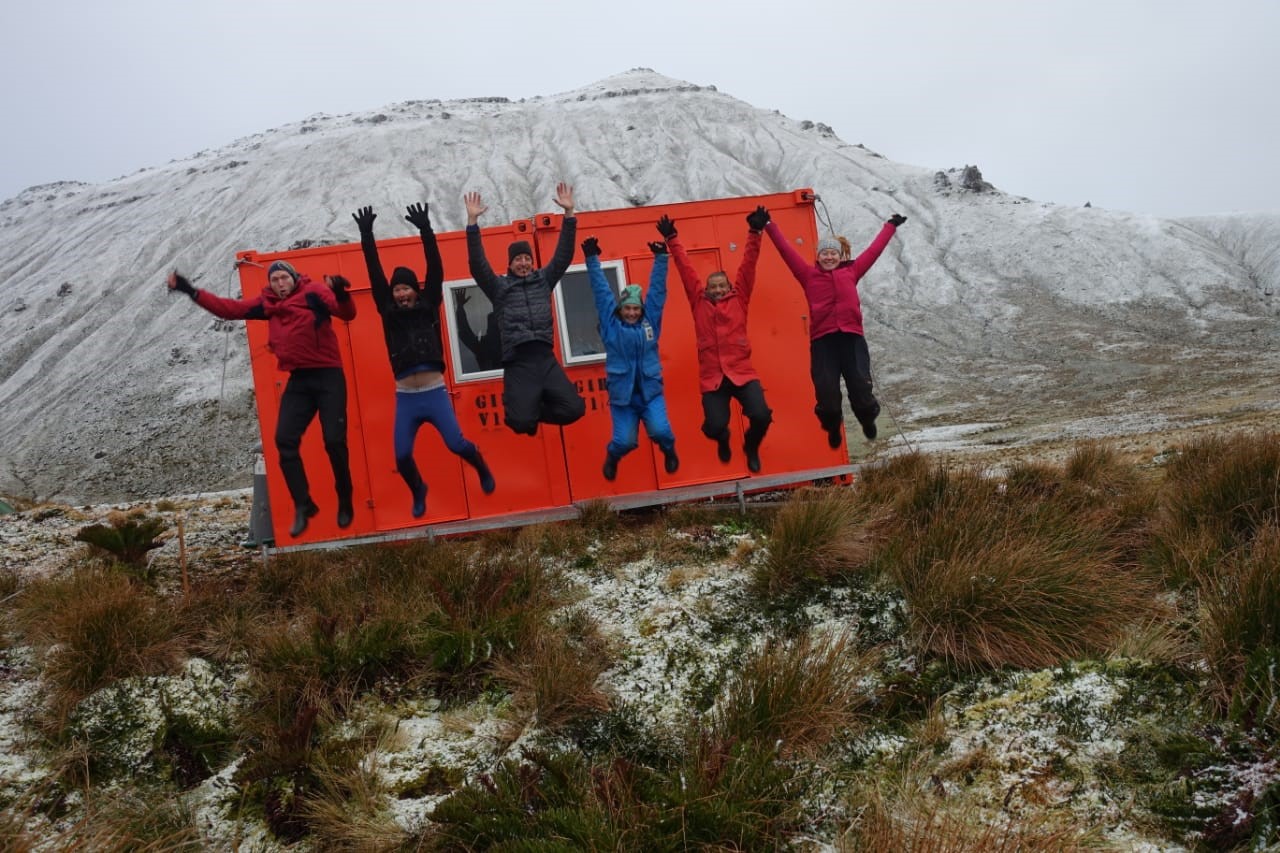 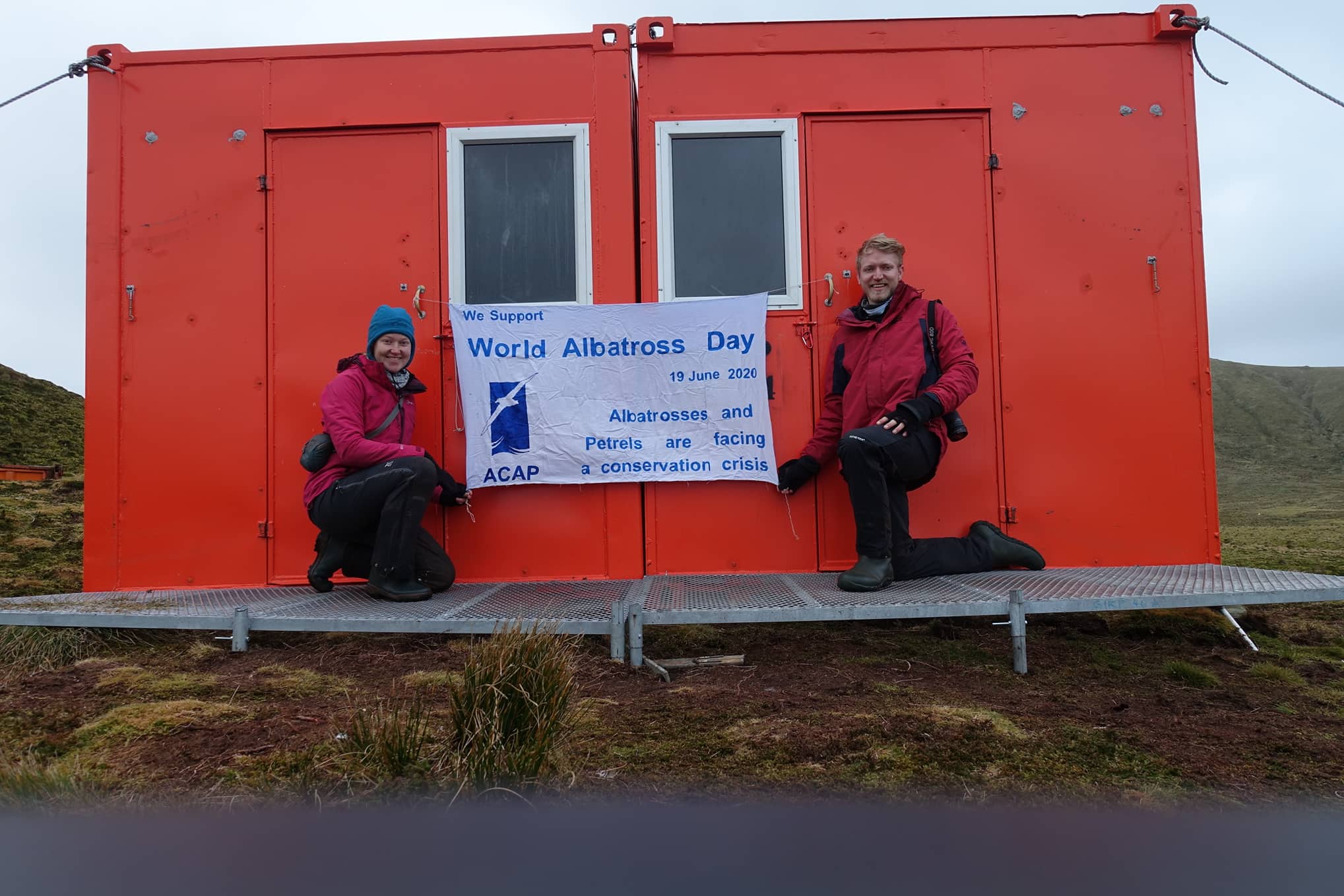 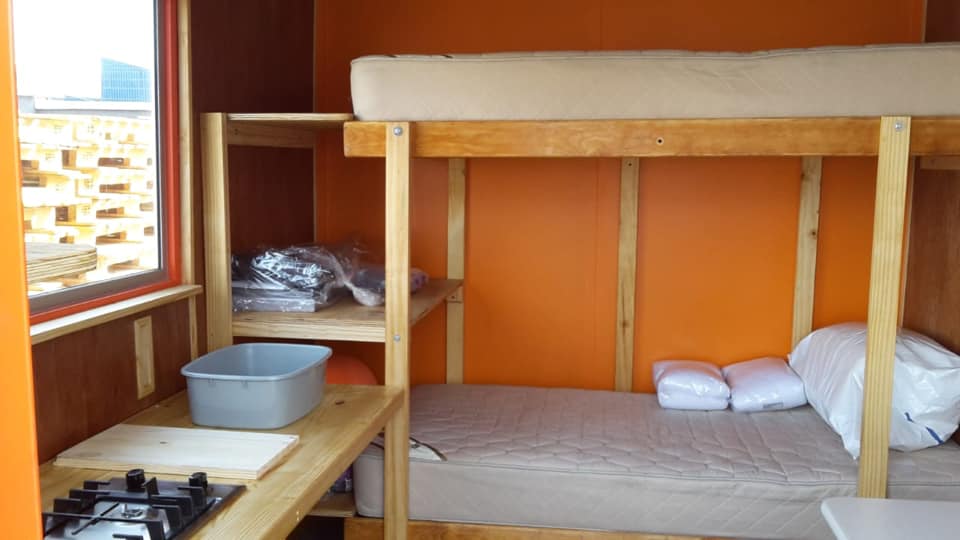 A basic interior but beats camping and outside cooking in the snow!

Field researchers Chris Jones, Alexis Osborne & Michelle Risi (in their second consecutive year on the island as members of South Africa’s G65 team) will now be able to overnight in the dry and (relative) warmth while they continue monitoring Gonydale’s Tristan Albatrosses.  If all goes well 2019/20 will be the last season that the albatross chicks will have to face attacks by mice, as next May poison bait will be dropped by helicopter over the whole island in an ambitious attempt to eradicate them.  The huts will also be used when Critically Endangered and endemic Gough Finches Rowettia goughensis are caught to be kept in temporary captivity next year to avoid them being at risk of poisoning along with mice.  A decision is expected to be made on how long the huts should remain in Gonydale after the eradication exercise.

With thanks to Ben Dilley and the FitzPatrick Institute for information and photographs.  The container huts were funded by the UK’s Royal Society for the Protection of Birds (RSPB) as part of the Gough Island Restoration Programme.

Erica Donnelly-Greenan (Moss Landing Marine Laboratories, Moss Landing, California, USA) and colleagues have published in the Marine Pollution Bulletin on surveys of entangled seabirds on the coast of California.  Sooty Shearwaters Ardenna grisea made up 8%.  A few Arctic or Northern Fulmars Fulmarus glacialis were also reported, as was a Black-footed Albatross Phoebastria nigripes entangled with a balloon.

“Marine fauna in the California Current System is susceptible to entanglement in anthropogenic debris.  We examined beach survey data from six California counties to describe trends of entangled marine birds and mammals (1997–2017). Surveyors reported 357 cases of entanglements among 65,604 carcasses. Monterey County had the greatest average entanglement rate (0.007) of surveyed counties, however, was not statistically different from Santa Cruz (p > 0.05). Twenty-six seabird species (97%) and three marine mammal species (3%), and three non-marine birds were affected. Numerically, Common Murre (23%), Brandt's Cormorant (13%), Western Gull (9.6%), Sooty Shearwater (8%) and Brown Pelican (7%) were the most affected due to abundance, but their entanglement rates were not statistically different (p > 0.05). The most vulnerable species were those frequently documented as entanglement despite low deposition numbers (Merganser spp. 25%). Entangling material consisted primarily of monofilament line (some hooks/lures), but other entanglement items were reported.”

Entangled Black-footed Albatross - from the publication

With thanks to Hannah Nevins.