The Hawaiian Department of Land and Natural Resources (DLNR) announced this week that a record number of Wedge-tailed Shearwaters Puffinus pacificus (Ua‘u kani) have hatched within the Ka'ena Point Natural Area Reserve on the island of Oahu.  Success is due to a predator-proof fence, funded by the U.S. Fish and Wildlife Service and installed by the state in early 2011 (click here) that keeps out non-native predators such as feral cats and dogs, mongoose, rats and mice (click here for more pictures of the fence). 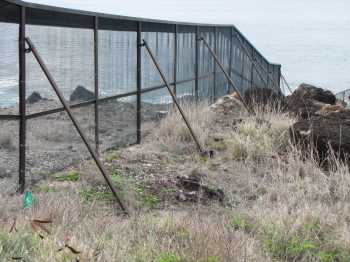 The anti-predator fence at Ka'ena Point.  Photograph by John Cooper

"Since the fence installation, the hatching ua‘u kani population has more than doubled - from a previous high of 1,556 birds in 2007, to 3,274 in 2012," said Lindsay Young, biologist with Pacific Rim Conservation (and also ACAP's North Pacific News Correspondent), who is studying seabird populations at Ka‘ena.  The Laysan Albatross Phoebastria immutabilis (Moli), which also breeds at Ka‘ena Point, has increased in numbers by 15% to 400 birds.  Click here to read how well the Laysans did last breeding season.

Seabirds were wiped out at Ka‘ena Point for decades by predation by introduced predators and off-road vehicles driving on the sand dunes where the shearwaters burrow and the albatrosses nest.  Access to vehicles was blocked in the early 1990s and, since then, seabirds began slowly to return and attempt to breed.  However, birds were constantly being killed.  "Every so often, a stray dog would kill dozens - and sometimes over a hundred - shearwaters" Lindsay Young said.  "Similarly, rats were eating 15 percent of the albatross chicks, preventing the population from recovering."

Search on Kaena Point on this web site to read more stories on the reserve and its predator-proof fence.

With thanks to Deborah Ward, Lindsay Young and Emma Yuen for information.