Getting longline fisheries into line: the Western and Central Pacific Fisheries Commission adopts a new seabird conservation and management measure

The Ninth Regular Session of the The Western and Central Pacific Fisheries Commission (WCPFC) has adopted a new seabird conservation and management measure that strengthens the protection provided to seabirds, and in particular albatrosses and petrels, in the World's largest ocean basin.

Meeting in Manila, Philippines over 2-6 December, the WCPFC session agreed to replace the existing Conservation and Management Measure to Mitigate the Impact of Fishing for Highly Migratory Fish Stocks on Seabirds (CMM-2007-04).

South of 30°S longline vessels will now be required to use a minimum of two mitigation measures, either setting hooks at night, weighting branch lines to increase sink rate, or using a bird-scaring (tori or streamer) line.  These three mitigation measures, used in combination, have been identified by the Albatross and Petrel Agreement as representing best-practice bycatch mitigation in longline fisheries.

The new Conservation Measure was drafted and put forward for consideration by the Government of New Zealand (click here).  ACAP was represented at the meeting by its Executive Secretary, Warren Papworth. 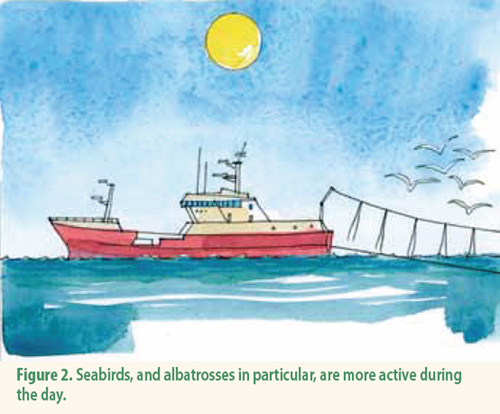 The new measure brings the WCPFC in line with the Indian Ocean Tuna Commission (IOTC) and the International Commission for the Conservation of Atlantic Tunas (ICCAT) which have both previously adopted the same "two out of three" best-practice mitigation measures over the last 12 months for longline fisheries of member countries within their jurisdictions.  For earlier news items on adoption of their new mitigation measures click on IOTC and ICCAT.

For an NGO perspective on the adoption of the new conservation and management measure by the WCPFC click here.

The meeting also agreed to the collection of additional data on seabird bycatch through its Regional Observer Programme.