48 500 seabirds estimated killed by longliners in the Atlantic over four years: over half of them albatrosses

Neil Klaer (CSIRO Wealth from Oceans National Research Flagship, Hobart, Australia) writing in the Marine Fisheries Review has estimated the numbers of seabirds killed by pelagic longliners in the Atlantic over a four-year period.

"Results of recent seabird bycatch studies in the International Commission for the Conservation of Atlantic Tunas Convention Area were combined to estimate total seabird bycatch of pelagic longline fishing in the Atlantic Ocean, and bycatch per selected species.  Available studies do not apply to the full spatial and temporal extent of the fishing effort, so assumptions were made to account for missing information.  Over the 4 years from 2003 to 2006 the total seabird bycatch estimate was 48,500.  Results indicate that about 57% of the pelagic longline seabird bycatch was albatrosses (Diomedea, Phoebastria, Thalassarche, Phoebetria spp.). This mortality is at a level to cause concern for the smaller and more vulnerable albatross populations in the region.  Variation in annual seabird bycatch was caused by variation in total fishing effort, and movement of effort away from areas of higher seabird bycatch rates." 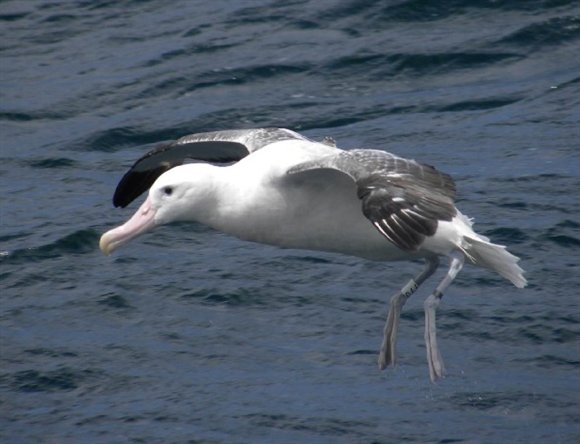 A Wandering Albatrossin the South Atlantic: at risk from pelagic longliners
Photograph by Martin Abreu