At South Africa's Prince Edward Islands in the southern Indian Ocean, Indian Yellow-nosed Albatrosses Thalassarche carteri breed only on the smaller island of Prince Edward, and not on the larger Marion Island.  The 2008/09 breeding population has been estimated as 7000 pairs (Ryan et al. 2009).

Indian Yellow-nosed Albatrosses have been occasionally seen ashore on Marion over the years, but have generally gone unreported in the literature, although a BxW photograph of an adult "visiting Ship's Cove" on Marion Island appears in van Zinderen Bakker et al. (1971).  Two more recent records are given here.

On 15 April 2005 a juvenile bird was photographed on Long Beach, King Penguin Bay in the north-east of the island.  Given the time of year it is thought likely the bird had recently fledged from the colony on Prince Edward Island, 27 km away. 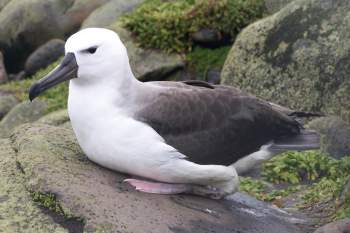 The second record is of an adult bird, photographed on 15 October 2007 on the northern edge of Long Ridge between Sea Elephant and Blue Petrel Bays.  This locality is also in the north-eastern region of the island, facing Prince Edward Island.  At this time of the year, the species would be incubating eggs on Prince Edward Island. 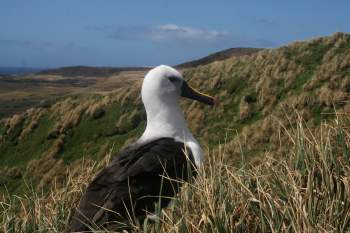 A single pair of Indian Yellow-nosed Albatrosses was recorded breeding on the Pyramid, Chatham Islands, New Zealand from 1998 to 2003 (Miskelly et al. 2006), extending its breeding range outside the Indian Ocean, where it also breeds on several French islands.  It remains to be seen whether the species will ever commence breeding at Marion Island.