A lifetime of change: foraging patterns of Wandering Albatrosses alter as they age

“Wandering albatrosses are large long-lived seabirds that inhabit the Southern Ocean.  This species uses wind to move at low energetic costs and probably represents one of the best studied life-history models in animals.  Here, using both tracking and isotopic data, we report on the lifetime distribution of wandering albatrosses at sea, constructing a synthesis about how their distribution, foraging movements and feeding ecology change throughout all life-history stages (i.e. juvenile, immature, pre breeding adults, breeding adults, sabbatical adults and senescent birds).  Males and females exhibit different foraging strategies that change throughout their life.  For instance, as males mature from young to old stages, they progressively move from subtropical waters to Antarctic waters.  In comparison, females remain in subtropical waters throughout their lives, but increase their speed of travel with age.  For both sexes, the first year at sea is a critical period, when the highest mortality occurs.  At this stage, juveniles have already fledged and are able to use the wind optimally to maximise movement, but require several months to reach the travelling speed of adults.  Immature albatrosses remain in warm subtropical waters, before returning to their birth place and future breeding grounds from where they move as central place foragers.  When recruited into the breeding population, they breed every other year.  In one year they invest in one long breeding season when males and females use separate foraging zones in the subtropics and sub-Antarctic, respectively.  In the subsequent year (termed “sabbatical” year), both sexes disperse across the Southern Ocean, with reduced segregation between sexes.  In total, throughout the approximate 50 year lifetime of a wandering albatross, an individual is estimated to travel a mere [sic] 8.5 million km.  We show that the changes in habitats and foraging strategies observed though the life time of wandering albatrosses are the results of behavioural adjustment to the successive constraints encountered, such as learning processes, breeding or ageing, and have profound consequences on survival and nesting success.” 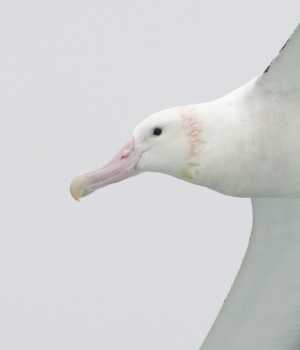 A Wanderer at sea, photograph by John Chardine